How a Science Fiction Novel Taught Me to Live Life Better 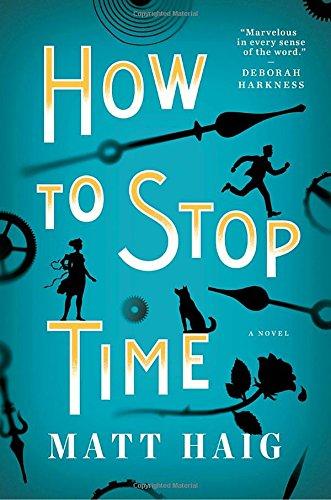 A little secret about myself: my main motivation for reading genre fiction is escapism. Don't get me wrong, life is good…but sometimes it's nice to just tune out the noise and get lost in a good book, you know? One of the things I love about books is how they can entertain you so much that you forget about life's troubles. Books can surprise you, too. I recently read Matt Haig's excellent science fiction novel How To Stop Time and it just blew me away, not only because it was entertaining, but also because it surprised me by teaching me to focus on how to live a better, more fulfilling life. The book went from a mere piece of entertainment (as cool as that can already be), to something with meaning.

How To Stop Time is about a man named Tom Hazard who ages at a much slower rate than the rest of us. (Well, most of us—more on that later.) Tom is four hundred thirty-seven years old despite having all outward appearances of being a healthy albeit unremarkable forty-year-old history teacher. He's a good history teacher, mostly because he's actually lived through it. His first person "you are there" accounts go a long way towards turning history from an academic list of facts to remember, to real-life stories that engage his students. But being long-lived has its price. Tom experiences headaches coinciding with his many memories of years gone by and of his lost love. So, what keeps him going? It's the desire to find his daughter, who also shares the same longevity and whom Tom hasn't seen in centuries. With the help of the Albatross Society—a clandestine group of near-immortals like Tom led by a shady elder named Hendrich—he hopes to one day be reunited with his daughter.

What can a story about a centuries-old history teacher teach me about life? Several things, actually.

Living Forever Isn't as Good as it Sounds

Tom's immortality may seem like a blessing. Who doesn't want to live forever? Here's the thing: Few, if any, of the people around you will live as long. Tom's true love was named Rose and he spends centuries missing her deeply. That's one of the ways in which How To Stop Time surprises. It works as a science fiction novel and as a love story and does so in such a subtle way that you can read it as one, the other or both at the same time.

Here's another downside to immortality: when you're living in a time period when witchcraft is feared, looking exactly the same after ten years is sure to raise a few eyebrows and more than a few pitchforks. The only solution is to move about and change identities every few years. Tom assumes many identities over his life, thanks to Hendrich and the Albatross Society. Tom's longevity, combined with tendency to avoid falling in love (the first rule of the Albatross Society), give him an emotional detachment to just about everything. Imagine if that feeling of "Been there, done that" lasted for centuries.

Learn From The Past

It's a simple fact of life, whether that life is short or especially if it's long: you're going to make mistakes. It's unavoidable. Tom makes some mistakes along the way, some that threaten to unmask him as a "demon". (We're talking about a lifespan that includes the 17th century, remember.) The good news is that mistakes are also learning experiences. They help us grow and they make us smarter. When we do something bad, it hurts, so we don't do it again. The lesson here is to learn from those mistakes and let go of the regret. Regret is baggage you just don't need.

This is a counterintuitive lesson to learn from a near-immortal. When you have a couple hundred thousand tomorrows, what's the rush? What makes today so special? There's always tomorrow! Loads of 'em! Except: You cannot predict the future. You could die next week and then where will all your tomorrows be? Ay, there's the rub! (That's a quote from Shakespeare's Hamlet. Shakespeare, by the way, was someone Tom met and worked with. A mighty fine lute payer, Tom is. Shakespeare was pretty good with the quill, too.) Tom didn't really waste his time procrastinating. He acquired lots of skills over the decades, like learning new languages and learning how to play several musical instruments. It was lesson that took him a long time to learn, though.

Don't Worry About the Future

Now that the past and present are taken care of, what about the future? While it's certainly good to plan for your future (invest in a 401k, kids!), you definitely shouldn't obsess over it. The reason is simple: when you do, you miss the present. You don't want to miss those "now" moments. (See previous lesson.) Tom didn't have much time to worry about the future, because there just so much of it.

Finding Meaning in Your Life

The final lesson to be gleaned from the quickly-turned pages of How To Stop Time is that you should find meaning in your life. For Tom, it was easy to become emotionally detached from the "mayflies" that came and went. Except for Rose and the daughter they shared, people were temporary acquaintances soon forgotten. It's probably no spoiler to say that Tom learned, after many long years, that it was the people in his life that gave it meaning. Everything else was irrelevant. The takeaway here is that it's easy to get caught up in the everyday grind of life, or to give in to the pressures of consumerism and amassing a giant pile of stuff, but it's the relationships you have with other people that will be everlasting. They make life rewarding, like the kind of literature that surprises you.

Not a bad batch of lessons to learn from a piece of Science fiction entertainment, eh?

John DeNardo is the founding editor of SF Signal, a Hugo Award-winning science fiction and fantasy blog featuring news, reviews and interviews. You can follow him on Twitter as @sfsignal.