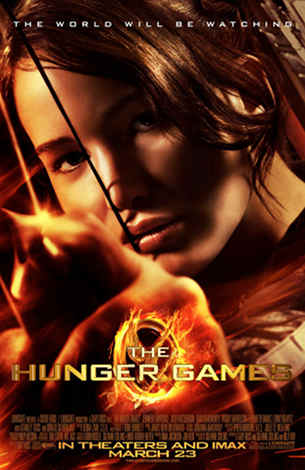 After all the Hype, how's the Movie?

Several weeks ago, I bought advance tickets to the midnight premiere of The Hunger Games. Like most American households with teen readers, ours has been caught up in the hype for months. Would the movie honor or overlook its source, a book my daughter, like grillions of other kids, loved?

(This is no idle speculation. When I took her to see the movie adaptation of The Lightning Thief, she walked out of the theater rather than endure the bastardization of a sacred text. At today's ticket prices, that hurt. If the adapters of The Hunger Games played equally fast and loose with the book, I stood to lose not only many hours of precious sleep but a substantial chunk of change.)

My daughter haunted the IMDB, watching for the announcement of every new cast member. "Jennifer Lawrence is blond. Katniss isn't blond!" She scrutinized the trailers for flaws. "Look. In this one, is Katniss is giving Prim the mockingjay pin?!" And she curled her lip at the eruption of Hunger Games merchandising. "I read The Hunger Games before it got big." (Not really; the Scholastic publicity machine was grinding its wheels before she got her hands on an advance reader's copy, but she did read it pretty early.)

So? What was the verdict?

Warning: What follows will be incomprehensible to anyone who hasn't read the book. If you haven't yet cracked its spine, what are you waiting for? You might also want to take a look at some other books that take place after the apocalypse rather than read further.

Well, as presaged by the trailer, "they totally left Madge out." Madge, for those not in the know, is the girl who gives Katniss the mockingjay pin. In probably the weakest sequence in the movie, a woman in the black market gives (!) Katniss the mockingjay pin, which she gives to Prim, who in turn gives it back to Katniss as her older sister heads off to the Capitol and the Games. Honestly, while I understand the desire of the filmmakers to simplify its cast of characters, this convoluted (and initially unconvincing) round of swaps seems far more complicated than simply introducing a character who is never seen again.

Nitpicking aside, though, the film adaptation works thrillingly. This should not really surprise anyone, as author Suzanne Collins earned her chops writing TV scripts before she turned to writing novels, and she is listed as one of the three screenwriters for the movie. A cynic might say The Hunger Games was made to be turned into a movie; I am content simply to affirm the book's cinematic affinities.

The realization of the setting is almost eerily spot on. Viewers move with Katniss from the Seam, which owes much to those mid-20th-century evocations of Appalachia seen in such works as The Coal Miner’s Daughter, to a Capitol inevitably informed by the aesthetics of Nazi architecture to the Arena, a disorienting, claustrophobic wood. The camera relishes the decadence of the Capitol, its luxurious extremes complemented by the ice-cream false colors of its smug, voyeuristic populace.

The violence so many have discussed is both abundant and brutal, but never sensationalized. These children kill and die in fast, blurred scenes that amp the tension but do not dwell, as one suspects the Capitol's cameras do, in near-pornographic detail. A number of preteens are among the Tributes, their vulnerability especially poignant when seen next to the burly post-adolescent physiques of Katniss, Cato and the others.

The multiple perspectives offered by film open up the storytelling. Where readers are trapped in Katniss' thoughts, cameras give viewers access to Haymitch's attempts to lobby sponsors, Seneca Crane's conversations with President Snow and, most cool of all, the Games control room, in which the Gamemakers carefully orchestrate the interactions of the Tributes and the menaces they encounter.

And Katniss? Those blond locks darkened to brown, Jennifer Lawrence embodies Katniss: her hardness, her uncertainty, her growing confidence in playing the crowds. Viewers see her every decision, effortlessly translating the protagonist's internal monologue for movie audiences. If she manages to stay awfully clean in the Arena, well, who cares?

Likewise, Josh Hutcherson shines as Peeta, his agreeable face conveying the character’s stolid decency and unsuspected ease with his public role. Movie audiences will never understand why some readers joined Team Gale, though, as Liam Hensworth is given little to do beyond look intensely at Katniss and camera.

If the adaptation has significant weaknesses, it's in the depiction of some of the most important secondary characters. A blue-ponytailed Stanley Tucci makes a perfectly unctuous Caesar Flickerman, and Elizabeth Banks’ Effie Trinket gleefully parodies Capitol excess (aided by a bang-up makeup job), but the filmmakers shortchange the key characters of Cinna and Haymitch. While Lenny Kravitz is warm and likable in the former role, he simply isn't given enough time with Katniss for viewers to understand the depth of their relationship. And Woody Harrelson may physically evoke Haymitch, but that character's drunken torment never really emerges, leaving him merely abrasive and slyly competent to a level fans of the books simply will not buy.

In sum, fans of the book who attend the movie will be quick to leap on discrepancies with the text, but not only will they probably not walk out, they will likely be happy to queue up again the next week for second and third viewings. My household critic's satisfied evaluation:

"Wow. That was intense."

Vicky Smith is the Children's & Teen Editor for Kirkus.