Ian Falconer Goes to the Dogs 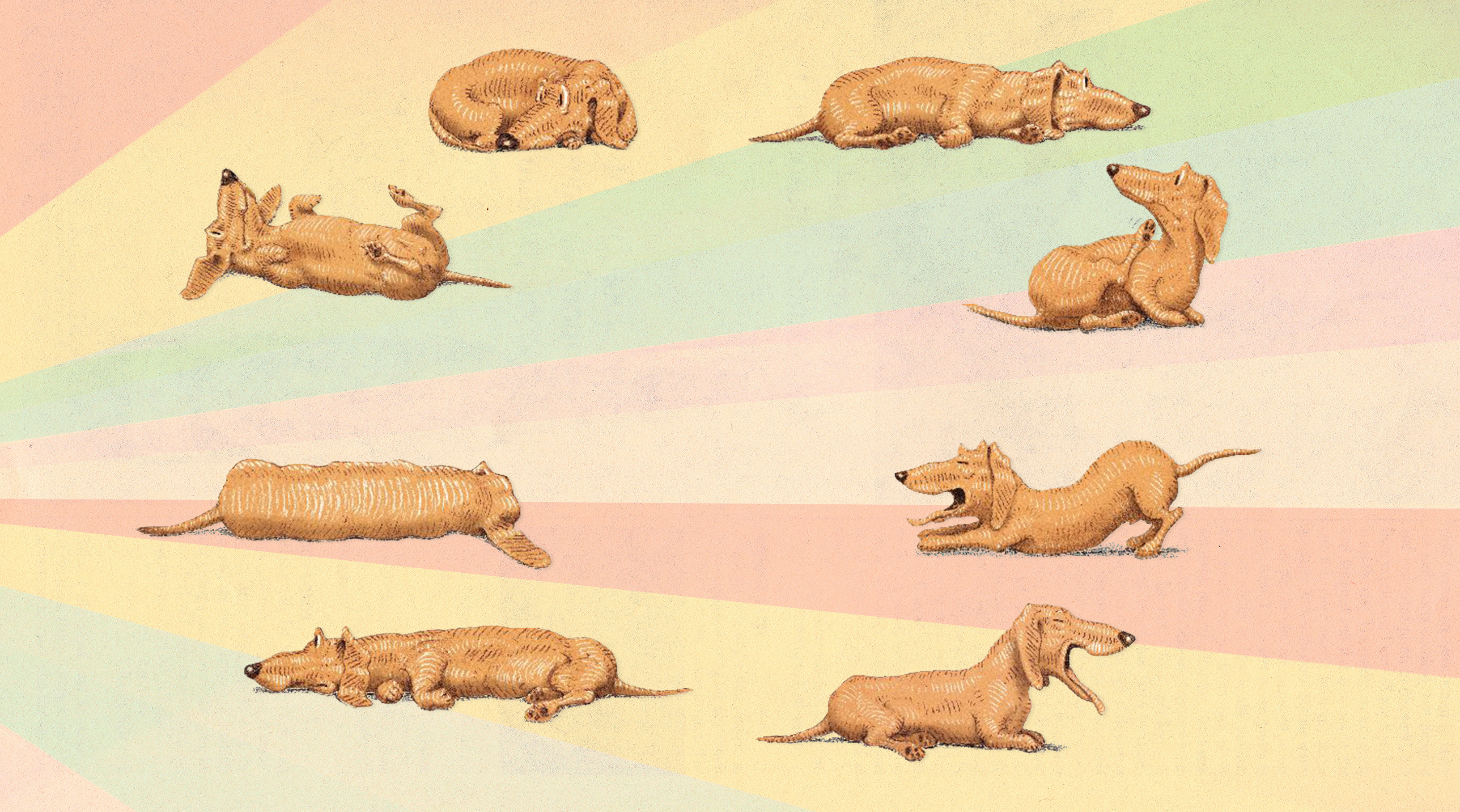 Illustration by Ian Falconer from ‘Two Dogs’, background by Kirkus

At the beginning of our interview, Ian Falconer clarifies that, right now, he doesn’t have dogs of his own. “I’d love to, but I live in Manhattan, and it’s just too much,” says the bestselling children’s book author and illustrator whose latest book is Two Dogs (Michael di Capua/HarperCollins, June 28). (Falconer spoke to us via a Zoom call not from Manhattan but from Connecticut, where he’s recovering from a broken leg.) His currently canineless household notwithstanding, Falconer and his family have a history with dachshunds that stretches back generations. “I’m very fond of the breed,” he says.

He recounts a time when he was living in Los Angeles with his own dachshund while also watching two dachshunds belonging to painter David Hockney; he was in bed, and all three dogs were taking turns burrowing down to the foot of the bed under the covers and then crawling back out. He likens this constant motion to being in a bus station, even more fitting because, as he sees it, dachshunds are “kind of bus-shaped. They’re long.”

The movement and playfulness of dogs are on full display in Falconer’s new picture book. The story follows Augie and Perry, two dachshund friends who are bored out of their gourds after their human companions have once again left for the day. They decide to break into the backyard, and much-needed shenanigans ensue. In a starred review, a critic for Kirkus called the book a “snug, funny round of hijinks by low dogs.”

Unlike Augie and Perry, Falconer wasn’t chronically bored when he was young, but he also notes that he “wasn’t stuck inside all day.” He remembers “going off to school and leaving the dogs at home when we were kids, and you’d hear them barking as you were going to catch the bus”—here Falconer does a spirited and accurate impression of an energetic barking dog. “And then when you came home from school, you’d hear the barking”—but the noise he makes this time is more like a gasp, the sound of dogs exhausted after a long day keeping watch. Falconer realized that “they’d been barking all day.…That was all they could do.”

In Two Dogs, Augie and Perry crave more adventure than sitting inside and yapping away, but while Perry is all-in on the idea of a jailbreak, Augie is more hesitant and fearful of getting in trouble. Falconer says the dogs’ personalities were inspired by his sister’s children when they were young: August “was always the cautious one, nervous, anxious, and Perry was always the one who ran straight out and jumped off the diving board.” The humans who inspired Augie and Perry are now about 25 years old, so Falconer’s been holding on to this idea for a while. He also jokes that his sister “strong-armed” him into writing it, as his other sister’s daughter is the inspiration for the titular pig in the author’s well-loved Olivia series, which began in 2000.

A successful picture book has to incorporate illustrations seamlessly with text, but Falconer’s process starts with the illustrations. “I’m really a visual artist; I’m not really an author, but I can write the story visually first,” he says. Another challenge of picture books is that they have a certain “economy” to them, according to Falconer: He has a limited number of pages to gracefully get the book’s most important aspects across to the reader, from the exposition to the laughs. Falconer has also been a cover artist for the New Yorker since 1996, another medium that requires an artist to convey bold messages in a “concentrated” space. Compared to a picture book, there’s not as much storytelling involved with a cover, but “you might be trying to tell a joke,” Falconer says. “You have to have all the clues there ready for people to get the joke very quickly,” and “people have to be able to look at it and laugh and pick up the magazine.”

Falconer initially laughs at the question of what advice he would give to aspiring illustrators—“they always ask that one”—but his answer is sound nonetheless. “Work hard. If you think you can get a good idea out, work all night long. I mean, literally work all night long and give them your best.” Other things he emphasizes most are listening to good teachers, looking to one’s favorite artists for inspiration, and drawing. “It really does start with drawing,” he says, along with “learning your techniques and learning how to use tools, your paints and your brushes and all that, to make a seductive image.”

Given that Olivia’s adventures have spanned multiple books, readers might wonder if they can expect to see more of Augie and Perry. Falconer isn’t quite ready to answer—“That depends on how successful it is”—but the possibility is there. Now that the two dogs have gotten a taste for mischief, one can’t help but wonder what they’ll get up to next.

Nina Palattella is the editorial assistant.