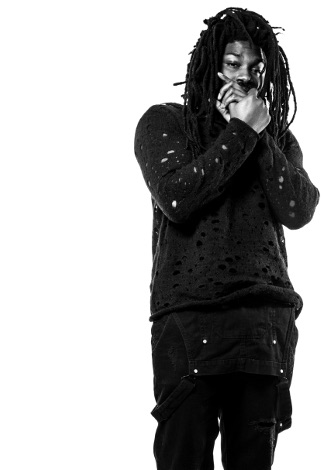 This year he has two books out that portray two very different sides of life as a young black boy. The first, As Brave as You, recounts a summer two brothers from Brooklyn, Genie and Ernie, spend with their grandparents in rural Virginia. The second, newer book, Ghost, deals with darker subject matter: in the wake of a traumatic event, the titular protagonist joins a track team but struggles to accept the positive changes in his life. Despite their disparate subjects, the two books share a profoundly hopeful outlook: that these boys’ fears and feelings (and those of real kids like them) deserve to be taken seriously.

In a literary landscape still primarily dominated by white perspectives, both Reynolds and his novels undeniably stand out. He sees two important purposes to increasing the diversity of stories available to kids. The first is to document what life is like for kids of color today, something which he points out his generation never got, give or take a few Walter Dean Myers novels. “We underestimate the power of acknowledgement and the power of ignoring the presence of a people,” he says. “I think that’s what bothers me the most about it. If a young person doesn’t see themselves in a book, then the young person is being told by the world that they do not exist and that they do not matter.”

The second is to provide an entry point into literature for young people. “It’s easiest to identify with that which is familiar before you journey out into that which is unfamiliar,” he says. It might be difficult for a 12-year-old living in a rough urban neighborhood to engage with the pastoral ideal of a book like Bridge to Terabithia; he’s much more likely to relate to Ghost’s struggle to stop getting in trouble at school.

Reynolds himself wasn’t much of a fiction reader as a child, in part because there were so few books that spoke to his own experience: the first novel he read was Richard Wright’s Black Boy when he was 17. Instead, he loved hip-hop, poring over liner notes for Tupac, Queen Latifah, and OutKast. “They were in fact the YA authors of my generation,” he says. “They were the people who were writing for us.” Reynolds eventually realized that these artists were part of a larger poetic tradition, which he set out to explore, reading Maya Angelou and Langston Hughes and writing his own poems.

Reynolds didn’t consider writing fiction until his mid-20s. On a trip to the beach, his friend Chris Myers, son of the aforementioned renowned YA author, pointed out that someone would need to pick up his father’s mantle of telling the stories of young black men and boys and suggested that Reynolds might be just the person. “It was at that moment that I turned that corner and I realized, ‘Man, I wonder what it would be like if I wrote stories in my own voice, in my own tongue?’ ” he says.

In keeping with that desire to represent his own reality, Reynolds’ books draw heavily on his experiences growing up. The brothers in As Brave as You are modeled on him and his older brother, who, just like Ernie, was much too cool for him. Grandma and Grandpop are a composite of his two sets of grandparents. One set lived on a farm in South Carolina, and his childhood trips to visit them inspired the book’s rural setting. His other grandfather was blind, but just like Grandpop in the book, he could pick out his own clothes, expertly navigate his home, and even cook his own food. Reynolds was deeply impressed by his grandfather’s independence. “It’s like my grandfather is a superhero,” he recalls thinking.

The character of Ghost is also based on a real person, one of Reynolds’ childhood friends. The trauma that Ghost has endured—fleeing his

home with his mom to hide in a nearby convenience store after his drunk father tried to kill them—is in fact a true story. “That’s one of those stories where my fear was people will say, ‘This is sensationalized.’ But it’s not because that actually happened,” Reynolds says.

His straightforward treatment of Ghost’s experience reflects Reynolds’ larger commitment to honesty in his fiction. He believes that attempting to soften reality for kids does them a disservice, especially since whatever you’re trying to hide is usually something they’ve already realized. “They’ve been waiting for somebody else to say this thing is a thing, your feeling is real, what you’re seeing is true, what you’re hearing exists,” he says. Brutal honesty is his way of respecting the truth and importance of young people’s experiences.

Reynolds wants to portray the sillier side of black boyhood as truthfully as he does the serious side: his characters crack jokes and talk trash just like he and his friends did (and still do). “These are very basic things that people don’t want to put into books because they find that it’ll be a little crass or a little edgy,” he says. But these are also the elements that engage boys in books and help to create a lasting relationship with literature.

Though Reynolds fell into writing novels somewhat accidentally, he values this chance to engage with kids and contribute to the body of children’s literature. “I think it’s an honor and I think it’s a privilege to write for young people,” he says. “Who better to write for?”

Alex Heimbach is a writer and editor based in California.