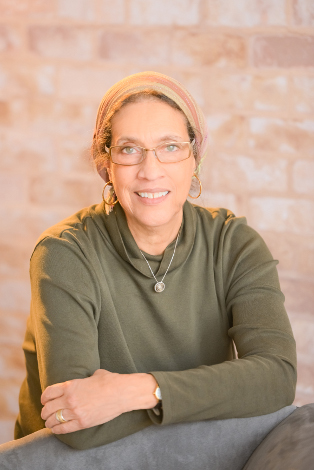 “We had a housekeeper,” says English, who was born in 1954 and grew up in Los Angeles, “and she pulled me aside one day, when I was about nine, and told me that, if I ever went to Africa, the Africans would kill me, because they didn’t like, in her words, ‘no light-skinned negroes.’

“I didn’t feel necessarily scared or anything like that,” she says, “because Africa was way over there and I wasn’t, but it’s a comment that stuck with me. At the time, I didn’t know the history [of colorism], the emotions behind that comment, but when I grew up I understood it. Everything fell into place.”

Similar words are spoken to 12-year-old Sophie, the intrepid and unforgettable star of It All Comes Down to This, by her family’s new housekeeper, Mrs. Baylor, in the summer of 1965. Sophie and her sister, Lily, who’s preparing to attend Spelman College in the fall, are the new girls in an all-white upper-middle-class Los Angeles neighborhood.

“We were the first colored family on this block,” English writes, “and for the first few weeks we were very aware of our ‘colordness’ every time we stepped out the front door. Everybody ignored us, but we knew we were annoying them big time just by being colored and living so close.”

Sophie soon finds a friend in Jennifer, who lives across the street. The girls have almost everything in common: same age, grade (going into ninth, because they skipped one), favorite Beatle (Paul), and love of reading. But when the two go down to the Baker family’s pool one hot day, Marcy, Deidre, and Jilly say Jennifer can swim, but Sophie can’t stay.

“Jilly looked me up and down,” English writes. “‘You know we don’t allow colored people in our pool—or our house.’ Marcy hurried over and joined her. Then Deidre. All three of them crossed their arms and stared at me.”

For Sophie, time freezes. The scents of chlorine, sunscreen, hot dogs, and Hawaiian Punch hang in the air.

“All the happy smells that mean summer and fun,” she writes. “But they were not for me. Not for me.”

English is the author of two series, Nikki DejaandThe Carver Chronicles, and several other acclaimed books for young readers. She lives in LA and is a retired elementary school teacher.

“Growing up, there was a house [in our neighborhood] that didn’t allow black people,” she says, “so when the kids went down there to play, my sister sat on our porch and just waited it out. It wasn’t a big deal—it was like the sun rising in the east and setting in the west—it was just the way it was and you accommodated it. Found something else to do.”

Sophie certainly experiences anger and upset at the racism she faces, but it doesn’t discourage the pursuit of her dreams—winning the lead in the community center play and becoming a famous writer among them. She strives and excels amidst family turmoil, puberty, and the civil unrest of the nearby Watts Riots.

“I wanted to write something that would reflect another kind of black life,” English says of Sophie’s experience. “No matter the professions, no matter the class, they’re still—you’re still—confronting racism, and I just want it to be understood. I want to open up a little bit of that world.”