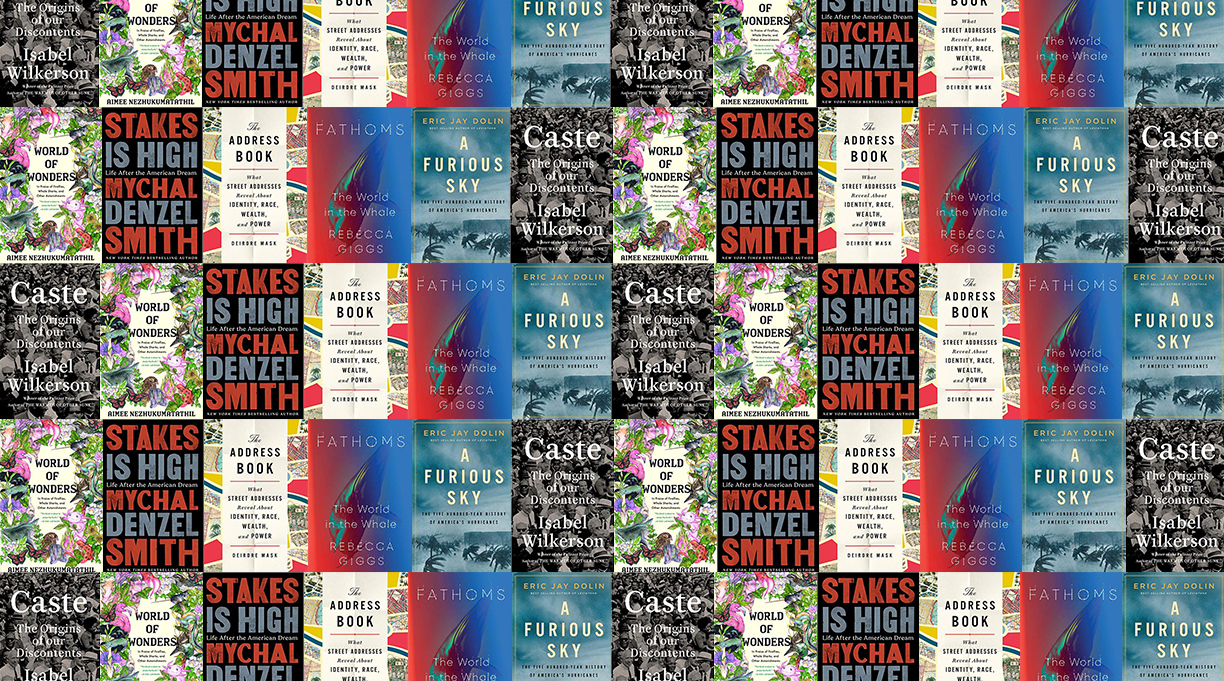 There’s no way around it: 2020 was a disaster. While many of us are looking forward to the end of the year—count me in that group—I’m pleased that we have at least one more anticipated celebration: the awarding of the Kirkus Prize in November. Every year, I put my trust in our judges to choose a robust list of finalists in the nonfiction category, and they never disappoint. Look back over the lists of finalists since we inaugurated the prize in 2014, and you will find a veritable canon of modern classics. In 2020, our judges—Kirkus critic Erika Rohrbach, Books Are Magic general manager Nick Buzanski, and writer and creative writing professor Kiese Laymon (himself a finalist in 2018)—continue that tradition.

Aside from the pandemic, no other issue has shaken our nation more than the continued plague of systemic racism and all of its attendant maladies. Three of the 2020 finalists are perfect for these times.

In The Address Book: What Street Addresses Reveal About Identity, Race, Wealth, and Power (St. Martin’s, April 14), Deirdre Mask provides “an impressive book-length answer to a question few of us consider: ‘Why do street addresses matter?’ ” Her first book lays out all the reasons that postal addresses are not just about receiving packages, but also involve racist and classist undertones that most people never consider. Roaming across the globe, “the author clearly demonstrates that package deliveries constitute a minuscule part of the significance of addresses—not only today, but throughout human history.”

Mychal Denzel Smith’s Stakes Is High: Life After the American Dream (Bold Type Books, Sept. 15) is one of the most potent books on race to appear in years, certain to take its place with Between the World and Me and other touchstone works of the past decade. In a sleek 200 pages, marked by astute scholarship and laser-sharp linguistic precision, Smith guides us through the history and current state of systemic racism, making it impossible to deny, as some ignorant observers would prefer. “The author is sharply self-aware,” wrote our reviewer, “and he would seem to expect his reader to approach his fine-honed argument with the same seriousness. Doing so is well worth the effort….An urgent and provocative work that deserves the broadest possible audience.”

Few authors are better equipped to tackle issues of race and class than Isabel Wilkerson, the Pulitzer Prize–winning journalist whose previous book, The Warmth of Other Suns, won the National Book Critics Circle Award for Nonfiction. In her latest, Caste: The Origins of Our Discontents (Random House, Aug. 11), she digs into “the formation and fortunes of social hierarchy” in the U.S., showing how many of our social and political ills are not just about race; they are about caste. Though the term is often associated with India, Wilkerson clearly demonstrates how it has infected nearly every era of American history. As she writes, “caste is the infrastructure of our divisions. It is the architecture of human hierarchy, the subconscious code of instructions for maintaining, in our case, a four-hundred-year-old social order.”

The other three finalists focus on the natural world, providing refreshing reading experiences on a variety of topics. As a longtime resident of South Carolina, where we get our fair share of hurricanes, I was captivated by Eric Jay Dolin’s A Furious Sky: The Five-Hundred-Year History of America’s Hurricanes (Liveright/Norton, June 9), a “sweeping, absorbing history of nature’s power” that covers every element involved in “how hurricanes have indelibly shaped America’s land and society.” Think of it as this year’s The Gulf, the 2018 Kirkus Prize (and Pulitzer Prize) winner: environmentally attuned, deeply researched, authoritative, comprehensive, and entertaining.

Rebecca Giggs’ Fathoms: The World in the Whale (Simon Schuster, July 28) is one of the most beautifully written, evocative books about animals that I have ever read, encompassing not just biology and behavior, but also myth, history, philosophy, and the many perils of the Anthropocene era. Our critic wrote, “Giggs presents the bounty of [her] scholarship in crisp, creatively written chapters addressing the many layers of the whale population’s unique physiology and evolutionary history, sociality, above-water balletic athleticism, and enigmatic ‘biophony’ of their vocalizations. Most importantly, she analyzes how their behavior can be predictive for the Earth’s future.” In August, I had the pleasure of interviewing Giggs, and her enthusiasm for her subject was obvious, an infectious joy that infuses every page of this gorgeous book.

“Gorgeous” would be an appropriate term for Aimee Nezhukumatathil’s World of Wonders: In Praise of Fireflies, Whale Sharks, and Other Astonishments (Milkweed, Sept. 8), an absolutely ebullient celebration of little-known corners of the natural world. Whether she’s discussing the vampire squid, narwhal, corpse flower, ribbon eel, dancing frog, or comb jelly, the author’s poetic sensibility hovers over every exquisite chapter. As our reviewer noted, “the writing dazzles with the marvel of being fully alive.” In this tumultuous year, that’s a gift we can all treasure.