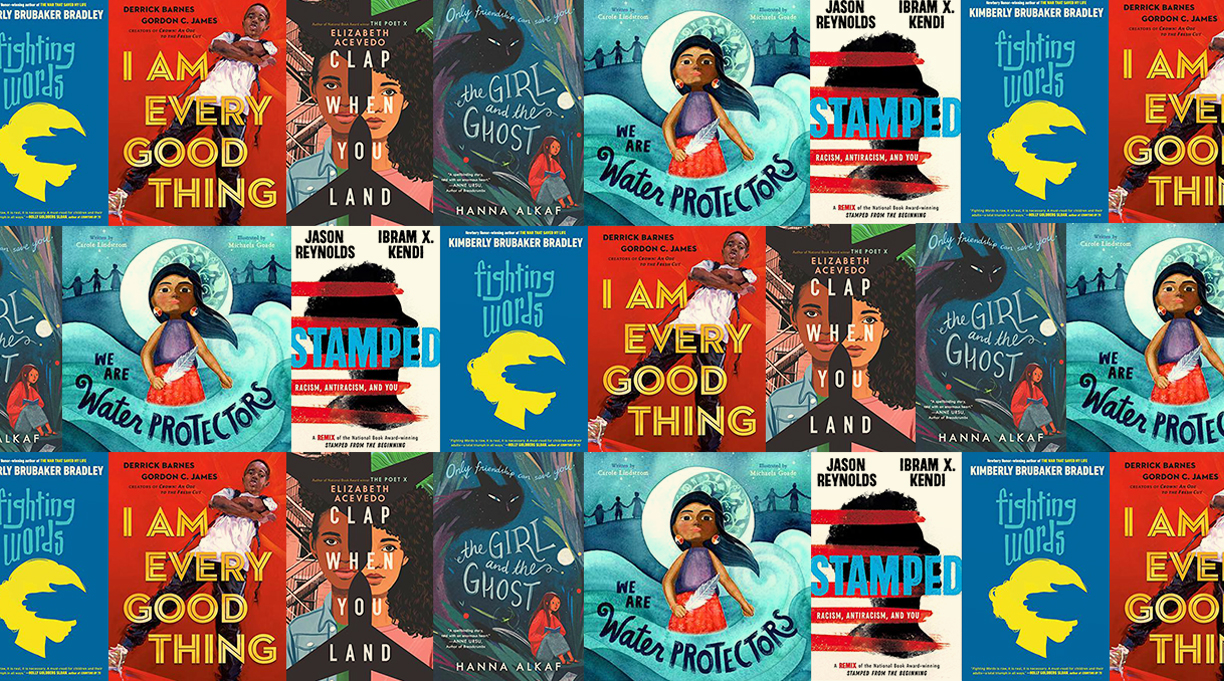 Over two late-summer afternoons of animated discussion, librarian Roxanne Hsu Feldman and Kirkus critic and author Kyle Lukoff met via Zoom to determine the six finalists for the 2020 Kirkus Prize for Young Readers’ Literature. There was no shortage of tremendous books to choose from, but they had to narrow it down to six: two picture books, two middle-grade books, and two young adult books. We are thrilled beyond measure by their choices; now author Nicola Yoon joins the deliberations and we bite our nails till the winner is announced on Nov. 5.

Derrick Barnes and Gordon C. James, whose Crown (Bolden/Agate, 2017) won the 2018 Kirkus Prize along with a host of other honors, team up again for I Am Every Good Thing (Nancy Paulsen Books, Sept. 1), this time ranging beyond the barbershop but still infusing every word and brush stroke with a fierce, protective love for Black boys. This poetic sequence of affirmations encourages its readers to claim their space proudly: “I am an explorer, planting a flag on every / square foot of this planet where I belong.” That means every single square foot, as is implicit in the wide-flung arms and legs of the beaming Black speaker. “And without a shadow / of a doubt, / I am worthy / to be loved.” No, never doubt it.

“We stand / With our songs / And our drums. / We are still here,” proclaims the refrain of We Are Water Protectors (Roaring Brook, March 17), by Carole Lindstrom (Anishinaabe/Métis) and illustrated by Michaela Goade (Tlingit). Their unnamed Indigenous narrator tells readers of the elders’ prophecy of “a black snake that will destroy the land,” brilliantly rendered by Goade as a jointed oil pipeline with a snake’s head, fiery tongue flicking with menace. But the young narrator is joined by many more who “stand as ONE” against it. Both a celebration of the resistance at Standing Rock and a promise to the Earth that Native peoples will continue fighting to protect it, the book is a powerful assertion that “our spirits have not been broken.”

Della (short for “Delicious” but never call her that) is only 10, but she’s experienced a lot in that short decade: the loss of her meth-addicted mother to incarceration, years spent after that with her mother’s brutish, unloving boyfriend, and placement in a foster home with older sister Suki after Suki walked in as the boyfriend was sexually assaulting Della. And, as Della will tell you, that’s not the hard part. In Fighting Words (Dial, Aug. 11), Kimberly Brubaker Bradley fearlessly tackles excruciatingly tough topics, setting her story in a mostly White East Tennessee community and filtering it all through Della’s candid voice. Della is indelible. (Full disclosure: Bradley is a freelance contributor to Kirkus.)

The Girl and the Ghost (Harper/HarperCollins, Aug. 4) are the eponymous dual protagonists of Hanna Alkaf’s middle-grade debut. Suraya, the girl, is the granddaughter of the witch who created the ghost, whom Suraya names Pink when he adopts her as his new master upon the witch’s death. Both thoroughly embedded in its Malaysian setting and universal in its treatment of themes such as friendship, bullying, and parental love, the novel expertly balances laugh-out-loud humor with chills—wryly amiable as Pink can be, he is also dangerous, and he is not the only malevolent spirit to haunt this book’s pages. The resolution of Suraya and Pink’s story is by turns thrillingly adventurous and utterly heartbreaking.

The protagonists of Clap When You Land by Elizabeth Acevedo (Quill Tree Books/HarperCollins, May 5) are half sisters: Yahaira, who lives in New York City with her parents, and Camino, who, since her mother died, lives with her aunt in the Dominican Republic. Neither knows the other exists. Each girl experiences the absence of their beloved Papi, who leaves New York to work in the DR each summer. Their lives collide in the aftermath of a tragic plane crash that kills their Papi—and everyone else aboard—while en route to Puerto Plata. Their grief is complicated by the realization that the man who meant so much to them had lied about such a critical part of his life. Yet this masterful work is filled with hope and optimism. The sisters exemplify the promise of the teen years: the courage it takes to reframe one’s understanding of parental figures fuels adolescent rage, idealism, love, and, ultimately, growth.

Perhaps more than at any time since the civil rights movement, young people are witnessing a national reckoning with conceptions of the past, present, and future. Stamped: Racism, Antiracism, and You: A Remix of the National Book Award-Winning Stamped From the Beginning by Jason Reynolds and Ibram X. Kendi (Little, Brown, March 10) is the ideal book to help them make sense of it all. Kendi's key points in Stamped From the Beginning are rewritten in Reynolds’ trademark vigorous style, whose rhythm and musicality soars. As people wonder how the U.S. ended up a politically polarized, deeply unequal society, this book—which the authors remind readers is “not a history book”—shows how anti-Black racism has over the centuries culminated in the divisions we see today. It’s a potent reminder that we are living with the consequences of past choices and, by understanding them, have the power to influence the future.

Laura Simeon and Vicky Smith are the young readers’ editors.