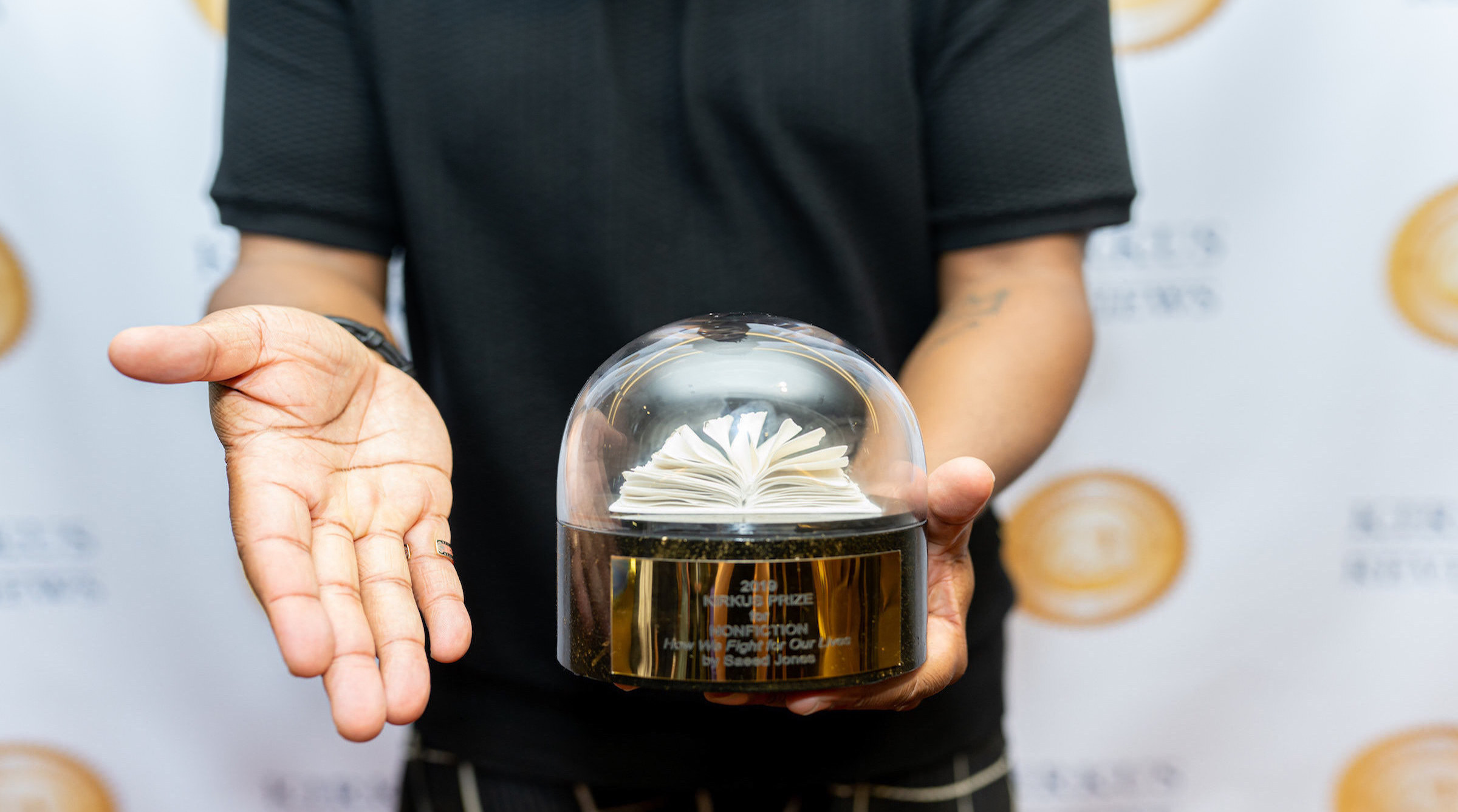 Saeed Jones with his trophy for the 2019 Kirkus Prize for Nonfiction. Photo by The Papes

Kirkus Reviews announced the finalists for the annual Kirkus Prize on Wednesday, with books from Big Five publishers as well as independent presses all in contention for the annual literary awards.

Finalists in the nonfiction category include A Furious Sky: The Five-Hundred-Year History of America’s Hurricanes by Eric Jay Dolin (Liveright/Norton), Fathoms: The World in the Whale by Rebecca Giggs (Simon and Schuster), The Address Book: What Street Addresses Reveal About Identity, Race, Wealth, and Power by Deirdre Mask (St. Martin’s Press), World of Wonders: In Praise of Fireflies, Whale Sharks, and Other Astonishments by Aimee Nezhukumatathil (Milkweed), Stakes Is High: Life After the American Dream by Mychal Denzel Smith (Bold Type), and Caste: The Origins of Our Discontents by Isabel Wilkerson (Random House).

The young reader’s literature category is made up of two books each in picture books, middle grade and young adult subcategories. The finalists for picture books are I Am Every Good Thing by Derrick Barnes, illustrated by Gordon C. James (Nancy Paulsen Books), and We Are Water Protectors by Carole Lindstrom, illustrated by Michaela Goade (Roaring Brook). Middle grade is represented by The Girl and the Ghost by Hanna Alkaf (Harper/HarperCollins) and Fighting Words by Kimberly Brubaker Bradley (Dial Books). Clap When You Land by Elizabeth Acevedo (Quill Tree Books/HarperCollins) and Stamped: Racism, Antiracism, and You: A Remix of the National Book Award-winning Stamped From the Beginning by Jason Reynolds and Ibram X. Kendi (Little, Brown) are the young adult finalists.

“This has been an unprecedented and challenging year for authors, publishers, booksellers, and librarians,” said Kirkus Reviews editor-in-chief Tom Beer in a statement. “We’re thrilled that the Kirkus Prize can help bring attention to 18 books of exceptional merit that deserve the widest possible readership. The diversity and timeliness of all the finalists speak to our present moment, but they will endure as lasting works of literature.”

Winners of the awards, who receive a $50,000 cash prize, will be announced at a virtual ceremony hosted by Kirkus CEO Meg LaBorde Kuehn from the Austin Public Library in Austin, Texas, on Nov. 5.