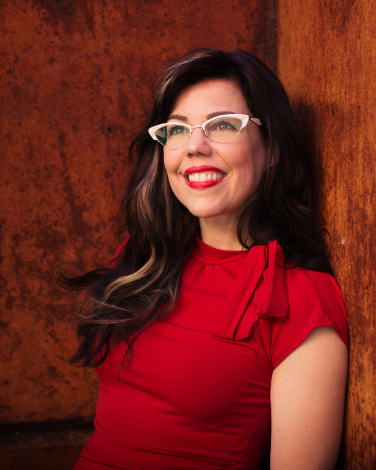 Think of it as a quilt sewn together with a patchwork of vibrant ideas. After all, there wasn’t just one single inspiration for Martha Brockenbrough’s new novel The Game of Love and Death—there were many. “I tried to take some of the really specific things that I like and make them into a coherent thing like a quilt,” she says. Those “specific things” include the Great Depression, the glory days of flight, the exploration of Greek gods, even Edward Elgar’s Enigma Variations. They coalesce into a discrete whole in The Game of Love and Death, a story set in Depression-era Seattle of two improbable lovers who turn out to be chess pieces in the game of life, their moves governed by forces beyond their control.

The novel’s heroine is spunky teenager Flora, whose evocative voice allows her to sing at Domino, the jazz club she’s part owner of. Yet Flora’s heart belongs to the skies; her dreams are temporarily assuaged when she occasionally flies a borrowed biplane. Brockenbrough, who has written questions for Trivial Pursuit, says the pioneering black pilot Bessie Coleman was also an inspiration for the novel. “Here was a manicurist who couldn’t get a pilot’s license in the U.S. and who got herself to France for training and became a barnstormer,” Brockenbrough points out. “Her story was just so alluring. I wanted Flora to have that, to explore tha

t nuance of getting away from humanity quite literally by flying up in the sky.”

It is at the airfield that Flora meets Henry, a white boy her age who is taken in by a rich publishing family after his father commits suicide. Ethan Thorne, the scion of that family, is Henry’s friend and secretly harbors a crush on him. Brockenbrough has the gods of Love and Death play with these characters’ lives in many intriguing ways.

While the story is about the color divide, other weighty topics such as sexuality and class also come into play. Henry’s tenuous hold on the upper class was a deliberate plot choice. “I wanted to put his character in as much peril as possible. If Henry had been really solidly in the upper echelon, it would have been less likely that he would have been bumped out of it,” Brockenbrough says. “I wanted to show that you can grow up in privilege and still be on the outside and fall in love with another outsider.”

Brockenbrough is not quite sure if life is as preordained as it is in her novel. After starting her writing career in her 30s, it feels to her like she’s stepped onto a path she’s meant to walk. “I do think that you know it when you’re not living the life you were meant to live,” she says. “You have to find the people you are meant to find and do the things you are meant to do and do them as well as you can. This is what you owe the world; you owe the world your best self.”

As for her novel, Brockenbrough extends the quilt analogy further. “I hope it serves to warm readers, and just as quilts themselves can carry messages and patterns that reflect the quilter’s state of mind, this book really says what I think about life and death and the love that happens in the midst of all that.”

Poornima Apte is a Boston-area freelance writer and editor with a passion for books.