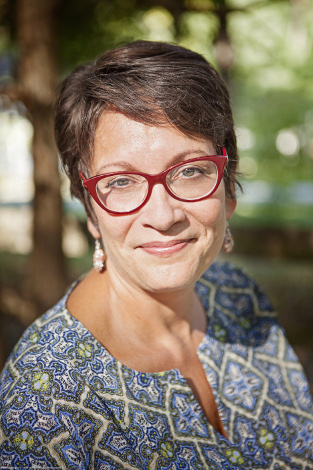 Merci Suárez Changes Gears, which was recently named a finalist for the 2018 Kirkus Prize for Young Readers’ Literature, examines the ridiculousness that can come with being in any school at the age of 11, the dynamics of friendship, socio-economics, and a story in which Abuelo (Lolo) is at the tail-end of Alzheimer’s. But at the heart of the novel is uncomfortable change. And Merci experiences heartache, but it isn’t the result of a tween, first (kind of) love entangled with angst. Instead, it arrives after an intimacy with Abuelo’s debilitating disease. Abuelo’s Alzheimer’s is a loss not only to him, but also to the loved ones who see themselves vanish from his memory.

But at the heart of the novel is change.

“Change,” Medina says, “is scary and constant.” Nothing stays the same. We are in a constant state of flux. I think of surfing. I look at surfers. They don’t lock their knees; they bend their knees. We have to stay nimble, to work through the fear, to embrace what’s coming—good or bad. A classmate dies. Someone leaves or changes. In writing that topic for kids, I keep that in mind. At the end, there’s no solution. Lolo was sick, he is going to get worse.”

Art certainly mirrors life for Medina. “We’re not far from the things we’re struggling with,” she acknowledges. “My uncle Diego Cruz was diagnosed with Alzheimer’s and declined rapidly, and I watched my cousin Diego Jr. figure out how to care for him.” Medina fearlessly offers stinging yet profound glimpses of her characters’ Latinx lives, but those glimpses don’t morph into preachy lessons. For instance, there’s the fleeting sentences in which a woman questions Merci, who’s taking a work break from painting with Papa. “This happens sometimes on our jobs,” Merci explains. “Customers watch us as if we might take things when they’re not looking.”

Intergenerationality is an immeasurable part of Medina. At one point, her mother-in-law, her own mother, and Tía Isa were all in different stages of declining health and moved in with her when Medina’s children were teenagers. For Medina, it was important to demonstrate how Latinx families, like Merci’s, look after elders. “How do we care for elders and still function in this bicultural reality?” she asks.

Children, from various backgrounds, have a larger sampling of books in which they might see themselves. Despite not having that selection, Medina still read a lot as a child, which she owes to her mom, who collected the encyclopedic multi-volume illustrated anthology Childcraft.

Not long ago, when cleaning out her mom’s belongings, Medina stumbled upon those books, and while she didn’t notice the problem as a child, these illustrations had no brown kids to be seen. She still read Nancy Drew, Charlotte’s Web, and all the books of that era. It was reading Sandra Cisneros’ House on Mango Street, in college, when the feeling became “immense.” “There were tías and tíos; there was the little girl with the dirty legs and patent leather shoes. I could see her, I knew them—and I’m not from Texas, and I’m not Mexican, but I knew that experience, and it took my breath away.”

From that moment, she was on a rampage. Medina started reading every Latino author voraciously, and it was comforting. “I feel so indebted to Sandra in big, deep ways.”

Medina loves how, today, the children’s community is trying to give kids a way to see themselves, to encourage them to be writers, editors, or librarians—to have a voice in literary arts. “I love the idea of expanding the table,” she says.

Sara Ortiz is the program manager for the Believer Festival.