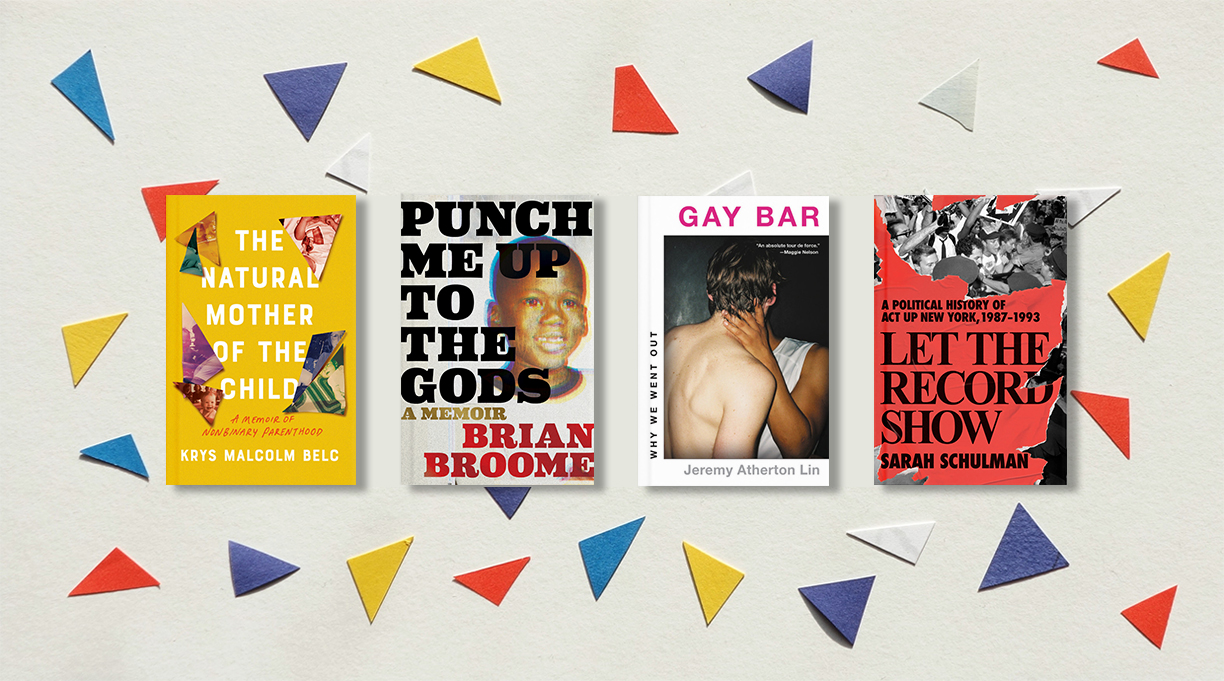 It’s astonishing to me that LGBTQ+ rights are still a hot-button topic. Of course, the previous five or so years seemed to slow the momentum of progress, but that’s a discussion for another time. When we were tasked with choosing a few books to highlight for this important issue, my initial list quickly ballooned well into the double digits. I whittled it down to a lean four titles, all of which are can’t-miss examinations of contemporary issues involving LGBTQ+ pride. Enjoy! (All quotes come from the Kirkus reviews.)

I have to start with a title that wins my personal award for best memoir of the year so far: Brian Broome’s Punch Me Up to the Gods (Houghton Mifflin Harcourt, May 18), a viscerally page-turning, devastating exploration of “growing up Black and gay and finding a place in the world.” In that vein, it immediately reminded me of two of my favorite memoirs of the past decade: Kiese Laymon’s Heavy, a Kirkus Prize finalist, and Saeed Jones’ How We Fight for Our Lives, a Kirkus Prize winner. That’s impressive—and entirely deserved—company for a first-time author, and I agree completely with our reviewer’s assessment: “Beautifully written, this examination of what it means to be Black and gay in America is a must-read.…A stellar debut memoir.” (Read our recent interview with Broome.)

I found another eye-opening journey of identity in Krys Malcolm Belc’s The Natural Mother of the Child: A Memoir of Nonbinary Parenthood (Counterpoint, June 15), “a powerful memoir in essays about the author’s experiences with nonbinary parenthood.” I admit that it’s a topic I had glossed but not considered closely, and Belc delivers a potent education. “Though the literature on parenthood is boundless, books on nonbinary parenthood are scarce,” writes our reviewer. “In his debut, Belc explores the universal emotions of ambivalence, joy, and occasional dread while simultaneously braiding in threads of his gender expression, partnership, and youth.” For anyone like me who is looking to learn more about the intricacies of nonbinary parenthood, this is an excellent place to start: “a candid, gritty, tender story that should garner empathy and understanding regardless of a reader’s background.”

Similarly, though I knew the general overview of ACT UP, the grassroots organization fighting the AIDS epidemic since 1987, I was ignorant of the level of impact of the organization’s work. Sarah Schulman’s Let the Record Show: A Political History of ACT UP New York 1987-1993 (Farrar, Straus and Giroux, May 18) changed that, as the author “clearly demonstrates that ACT UP was founded in part to engender a relentlessly democratic and inclusive force of activism. That ideology explains the heft of this book, which isn’t written as traditional history but as a mashup of events witnessed by Schulman and oral history that’s truly all-encompassing. Readers are right there with activists, hearing their stories from them but also others who knew them.”

Speaking of being right there, Jeremy Atherton Lin’s “vibrant and wistful” Gay Bar: Why We Went Out (Little, Brown, Feb. 9) illuminates another vital element of the LGBTQ+ community, one that many readers may wrongly overlook as only entertainment. “In his first book, Lin examines queer history through the lens of what he sees as a vanishing institution: the gay bar, which, in recent years, has been ‘under threat not so much by police, but a juncture of economic factors like unchecked prop­erty speculation and an upsurge in stay-at-home gays.’ With raw, voyeuristically explicit detail, the author escorts readers through the crowded, smoky gay bars of London before turning to erotic adventures in California, where he came of age in the early 1990s.” (Hear Lin discuss the book on Kirkus’ Fully Booked podcast.)