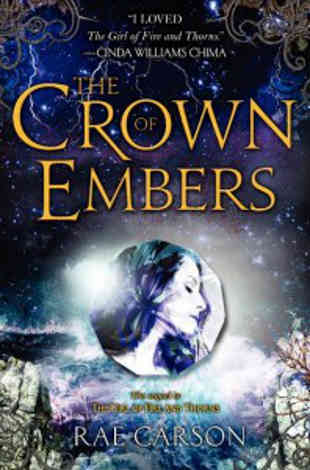 It’s Cybils season again! I’m ridiculously delighted to be one of the lucky few to serve on the YA panel this year. However! That means that once the nominations start rolling in, I’ll have to swear off all fantasy, sci-fi, horror, steampunk, paranormal romance and anything else that isn’t straight-up realistic YA fiction. So, to avoid Angst Overload, I’m avoiding all straight-up realistic YA fiction for the next few weeks, and immersing myself in as many fantasy/sci-fi stories that I can find the time for. First up is Rae Carson’s The Crown of Embers, the sequel to last year’s utterly fantabulous The Girl of Fire and Thorns.

If you’re a fan of epic fantasy chock-full of political intrigue, adventure, romance, strong worldbuilding and brainy heroines—my review of the first book invoked Tamora Pierce, Kristin Cashore AND Robin McKinley—I can’t recommend these books highly enough. So if you haven’t read the first one, you should get on that, stat!

Bookshelves of Doom weighs in on Ned Vizzini's 'The Other Normals.'

The Crown of Embers begins a few months after the events of the first book. Seventeen-year-old Elisa is a much-beloved hero, yes, but she’s also a “foreigner queen, ruling by an accident of marriage and war”—as her faithful servant Ximena warns her, popularity rarely lasts—and it doesn’t take Elisa long to realize that she’s much better at heroics than at governing. When she was working for the war effort, the living conditions were much more primitive, but she didn’t have to deal with power-grabbing, manipulative nobles squabbling over an empty treasury.

Worse, assassins are gunning for her, but due to the actions of her highest-ranking General, she can’t even completely trust her own army! Luckily, dreamypants Lord Hector, the captain of her Personal Guard, is totally in her corner. But despite the clear attraction they feel for each other—clear to this reader, at any rate—they both need to marry for political gain, rather than for love... which makes the excruciating process of interviewing candidates for the king’s vacant throne all the more horrible.

Everything that I loved about The Girl of Fire and Thorns is here: the world-building, the characters, the action and the romance. The magic in this world is steeped in religion, and Elisa’s faith in God continues to be hugely important to her—but she never preaches to anyone, and never judges others for differing beliefs. I’m also extremely happy to report that The Crown of Embers does NOT suffer from middle-book-in-a-trilogy-itis (AKA Second Book Syndrome). It works as a continuation of the story, yes, but it isn’t just about lining everything up for the final installment. It’s a story in its own right, and not only does Elisa do a whole lot of growing and maturing, she really begins to come into her own as a woman. I’m dying for the sequel.

My only disappointment? The cover art. The model on the US edition doesn’t have Elisa’s “dark skin and black hair,” so I’m planning on buying the (gorgeous) UK edition instead. And I’m going to send a note to Greenwillow explaining why they lost a sale.

Next up? Riveted, the third book in Meljean Brooks’ alt-history-steampunk-romance Iron Seas series. I am so excited to read it.

Let's be honest. If she isn't writing Bookshelves of Doom or doing her librarian thing, Leila Roy is most likely being tragically unproductive due to the shiny lure of Pinterest.