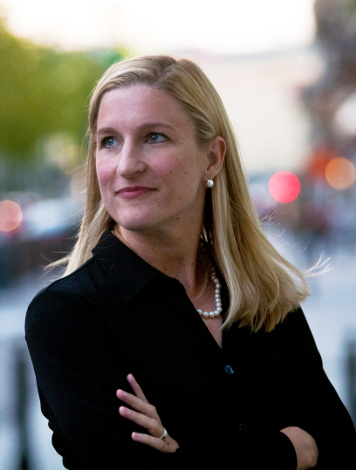 On the morning of Jan. 30, 1945, the German passenger ship Wilhelm Gustloff left the Polish port of Gotenhafen carrying roughly 10,000 people, mostly civilian refugees. That night, the ship was struck by three Russian torpedoes. It sank in just 60 minutes, and over 9,000 people died, making it by far the worst maritime disaster in history. (For comparison, the sinking of the Titanic resulted in around 1,500 casualties.) And yet, almost no one has heard of the Gustloff.

Ruta Sepetys has been fascinated with these kinds of “hidden histories” since she discovered one in her own life. She had always known that her father fled from Lithuania during WWII—what she didn’t realize was that, in retaliation, the Soviets deported some of the relatives he left behind to Siberia. She became determined to remind others of this forgotten story, so she turned it into her first book, Between Shades of Gray.

After publishing that novel, she says, “My father’s cousin came to me and said ‘Ruta, I know you like hidden history, and there is a secret story of WWII that history has opted to forget.’ ” The cousin explained how she had been all set to sail on the Gustloff but hadn’t been able to board on the day of departure. She explained how many had died. And she asked Sepetys to write about it.

Sepetysfelt compelled to search out the story—traveling to half a dozen countries and interviewing survivors—and her investigation eventually became her new novel, Salt to the Sea. The book traces the journeys of four teenagers as they converge on the fateful ship: Emilia, a pregnant Polish girl fleeing for her life; Florian, an East Prussian on a secret mission; Joana, a Lithuanian nurse; and finally Alfred, a prideful young Nazi. Each has his or her own perspective and baggage (literally and figuratively)—it was important to Sepetys to portray the full sweep of people and cultures caught up in Operation Hannibal, the Nazis’ massive operation to evacuate 2 million people from East Prussia and the Polish corridor.

Despite their differences, the characters (with the exception of Alfred) are united in the challenges they face, caught between the  Nazis, who would arrest or conscript them, and the Soviets, who would simply kill them. “And amid all this were children, innocent kids who were left with an inheritance and a responsibility for something that they had no role in causing,” Sepetys says. “It haunts me.”

Even so, she’s discovered wisdom and strength amid the horror and, in focusing on those more hopeful aspects, wants to encourage readers to do the same. “History divided us, but through reading we have a chance, through story and study and remembrance, to learn and grow,” she says. To that end, she hopes her novel will serve as a “door” for readers into the real stories of those who lived through Operation Hannibal.

Sepetys herself will continue to seek out the lost voices of history and give them a chance to be heard. “Why is it,” she wonders, “that some parts of history become part of our collective consciousness, but then these other stories, equally as important, slip through the cracks?”

Alex Heimbach is a freelance writer living in California.