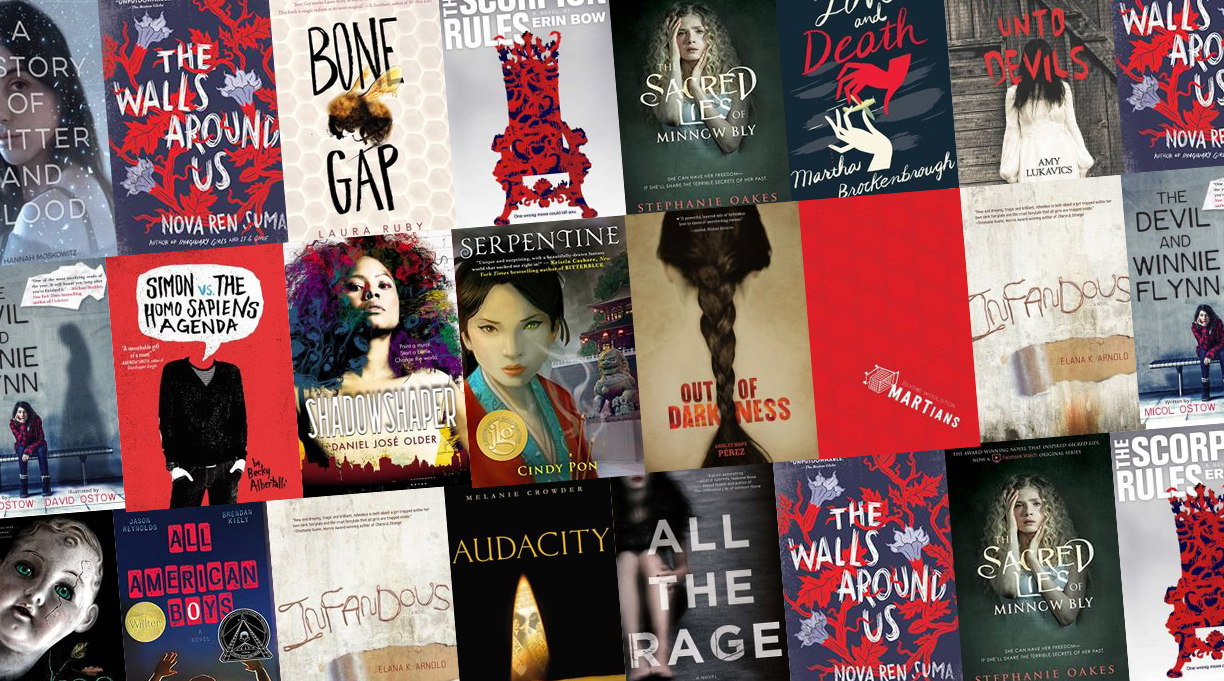 It’s never easy to narrow down a list of my favorite reads of the year, and this year was full of so many gems that I’m thinking that it might be even HARDER than usual.

Without ANY ado, in no particular order, here are my 2015 superlatives:

Most adorable (TIE): Simon vs. the Homo Sapiens Agenda, by Becky Albertalli, and Dumplin', by Julie Murphy

WHENEVER I WALK BY THESE BOOKS, I PICK THEM UP AND HUG THEM. Like, literally. For actual real.

Required Reading for All: All the Rage, by Courtney Summers

mers doesn’t A) pull punches, or B) give her characters—or readers—any easy answers. Devastating, cathartic, and sadly, NECESSARY.

Angriest Book That Doesn’t Have Rage in the Title: Bone Gap, by Laura Ruby

Yes, this book is EXACTLY as fantastic as everyone says it is.

Most Exciting Series Opener: The Scorpion Rules, by Erin Bow

My only complaint is that the issues don’t come out often enough. I NEED MORE MORE MORE.

Book I Most Wish I’d Written About at Length: The Walls Around Us, by Nova Ren Suma

ship and race and privilege and power! Twisty-turny legit-creepy goodness, all wrapped up in absolutely lovely prose!

Most Likely to Cause Most Ugly-Crying (TIE): Out of Darkness, by Ashley Hope Pérez, and The Game of Love and Death, by Martha Brockenbrough

Both books, for entirely different reasons, could also be given the Most Likely to Make Readers Reconsider How They Think About History award.

Bravest, Most Beautifully-Crafted Voice: A History of Glitter and Blood, by Hannah Moskowitz

Me, reading this book the second and third times: HOLY COW HOW DID SHE DO THIS THIS IS ENTIRELY AMAZING.

Most Likely to Be Underestimated (TIE): Kissing in America, by Margo Rabb, and The Truth Commission, by Susan Juby

Both of these books have such depth and such nuance. Both of them look at friendship and family and culture a

Secret poetry-reading! Immigrating to the United States from Russia! Social justice, workers’ rights, and women’s suffrage! ALL IN VERSE.

Most Gorgeous Use of Fairy-Tale Imagery: Infandous, by Elana K. Arnold

The HOLY COW IS SHE REALLY GOING TO GO THERE? YES, YES SHE IS Award: Infandous, by Elana K. Arnold

It’s been almost an entire year and I still can’t talk coherently about how excellent this book is.

Most Likely to Cause Fear-Induced Nausea: Daughters Unto Devils, by Amy Lukavics

Pro-tip: if you’re looking to move into a new cabin, don’t move into the one covered in bloodstains.

As I’m somewhat of a misanthrope and also rather claustrophobic, I didn’t think that trips to big-box stores could ever be MORE stressful for me. Thanks a lot, Blythe Woolston.

Double-plus bonus points for working in some lesser-known references in—the characters really do talk like horror nerds. Such fun.

There’s so much to love about this book, but Sierra’s willingness to acknowledge her own fear and anxiety and STILL move forward just killed me.

Entirely different styles and themes and even categories—Kuehn writes dark, meaty YA thrillers, MacLean writes adult historical romance—but I had the same reaction to both discoveries. In each case, I read the most recent book…and then I sat down and read the entire backlist.

Books I Most Regret Not Getting to Yet: Cuckoo Song, by Frances Hardinge; Serpentine, by Cindy Pon; The Sacred Lies of Minnow Bly, by Stephanie Oakes; and All-American Boys, by Jason Reynolds and Brendan Kiely

BUT THERE ARE STILL A FEW DAYS LEFT. I’m still hoping to squeeze them all in!

In addition to running a library in rural Maine, Leila Roy blogs at Bookshelves of Doom, is a contributor at Book Riot, hangs out on Twitter a lot—possibly too much—and watches a shocking amount of television. Her cat is a murderer.