The 1619 Project, for Readers Young and Old 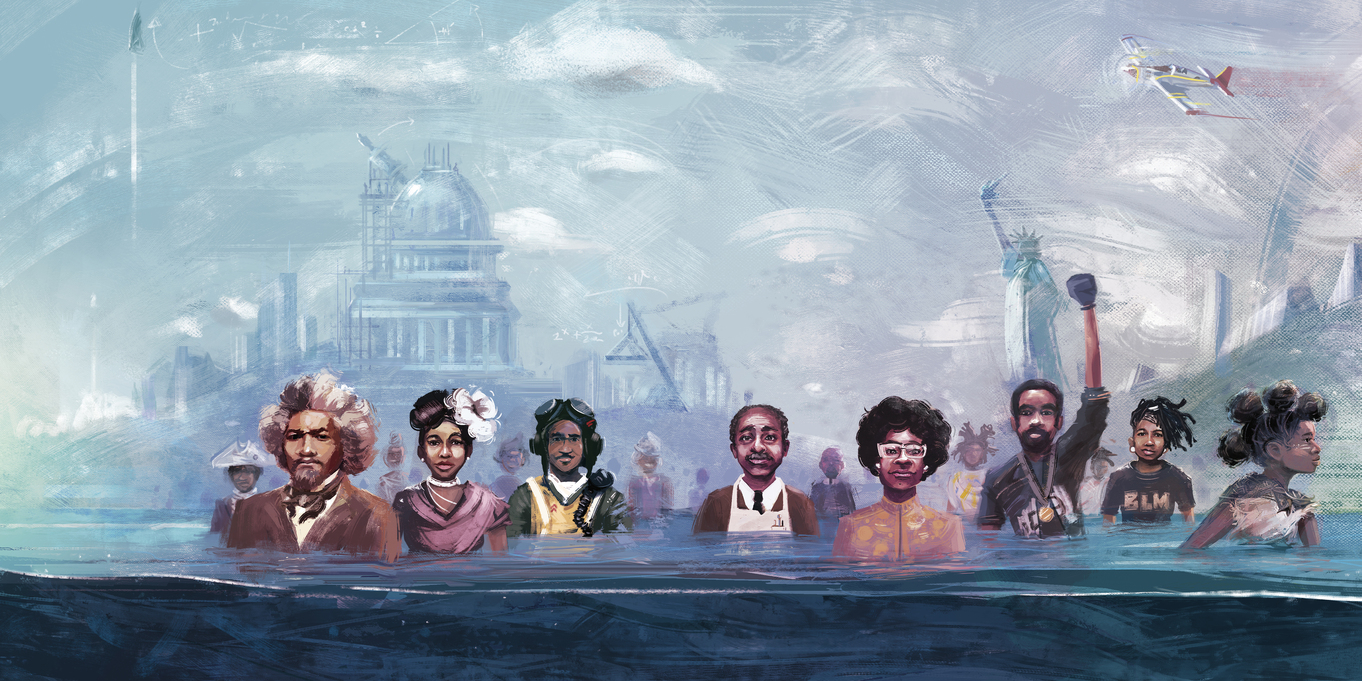 Illustration by Nikkolas Smith from ‘Born on the Water’

In a recent interview with Kirkus Reviews, journalist Nikole Hannah-Jones talks about the challenges of writing her capstone essay for the 1619 Project—the groundbreaking New York Times anthology she edited, reframing slavery as a central fact of American history. (The first enslaved Africans arrived on the shores of Virginia in 1619.)

“I had writer’s block, and I was panicked,” Hannah-Jones tells contributor Karen R. Long. “And the line just came—‘They say our people were born on the water’—and I just started writing. The ancestors delivered that line to me—I felt that so much.”

Hannah-Jones has now adapted the project for a new book, The 1619 Project: A New Origin Story (One World, Nov. 16), which includes photos, poems, and fiction along with expanded versions of original essays by Bryan Stevenson, Wesley Morris, Ibram X. Kendi, and others. Our starred review calls it a “much-needed book that stakes a solid place in a battlefield of ideas over America’s past and present.” In the interview, Hannah-Jones reflects on the challenges of creating the project and the conservative backlash against it as well as the inspiration that it continues to provide.

The powerful line she invokes also provides the title for a companion picture book for children. Born on the Water (Kokila, Nov. 16) is written by Hannah-Jones and Renée Watson, author of the Newbery Honor book Piecing Me Together, with illustrations by Nikkolas Smith. The story is framed by a young Black girl who is “ashamed” when the teacher gives the class an assignment to trace their roots; “I do not know where I begin, what my story is,” the girl says. Her grandmother tells her the story of her people, beginning not with enslavement in America, but in the Kingdom of Ndongo in West Central Africa, where they had a vital civilization and “they danced to celebrate, to mourn / They danced as a way of worship, to offer thanks.”

The grandmother’s narrative follows the people across the Atlantic to Virginia—a “sweet-sounding word / for a place of such pain, / a sweet-sounding word for the place / where American slavery begins”—and through bondage, resistance, survival, and legacy. Along the way, Smith’s painted illustrations are vibrant and haunting, full of rich colors that establish a range of moods. Kirkus’ starred review calls Born on the Water a “gift to Black Americans and everyone else who reads it.”

In an interview with Essence magazine in September, Watson explained why it was so important to create a version of the 1619 Project especially for young readers. “I think we do all children a disservice by selecting which parts of history they can learn about,” she said. “I hope the young people reading this book become citizens of the world who are critical thinkers and empathetic changemakers. I think there’s something powerful about a child understanding the world they’ve inherited and asking them to dream of the world they want to live in.”

Both books ask readers young and old to think critically and create change. Let’s hope they are read, taught, and passed on for years to come.