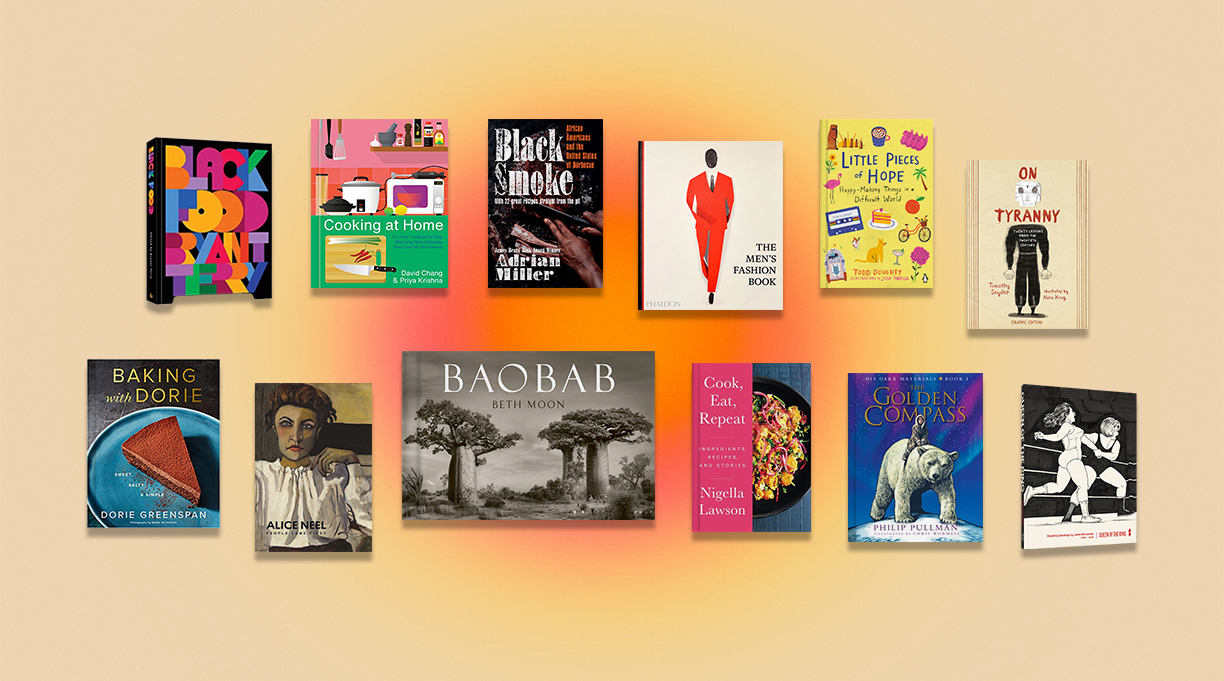 Background by mymind on Unsplash

For bibliophiles, there is simply no better gift to receive—or to give—than a book. Our editors found 12 titles—many of them cookbooks and art books we would not usually review—that would brighten anyone's holidays.

The British food writer best known for How To Eat (1998) and How To Be a Domestic Goddess (2000) returns with her 12th cookbook, an ode to the rhythms and routines of home cooking—which, “like life,” she writes, “relies on both structure and spontaneity.” The book is full of enticing recipes (chicken in a pot with lemon and orzo; “lasagna of love”; chocolate, tahini, and banana two ways) along with brief essays at the head of every chapter (“What Is a Recipe?”; “A Is for Anchovy”; “A Loving Defense of Brown Food”). Lawson sparks the imagination as well as the appetite.

Queen of the Ring: Wrestling Drawings by Jaime Hernandez, 1980-2020

Any fan of Love and Rockets—the groundbreaking alternative comic that Jaime Hernandez has been putting out with brother Gilbert since 1981—will be familiar with the character of Rena Titañon, the women’s wrestling champion. Now his stand-alone drawings of women wrestlers along with excerpts from an interview about the work have been collected for this volume. Many were inspired by the wrestling magazines of his youth (“Barbara Perez Will Do Anything to Keep Her Title” reads one coverline), and all reflect the dynamism and campiness of the sport.

When The Golden Compass was originally published 25 years ago, the Kirkus reviewer recognized a future classic in the making: “This first fantastic installment of the His Dark Materials trilogy propels readers along with horror and high adventure, a shattering tale that begins with a promise and delivers an entire universe.” For the book’s anniversary comes this oversized edition with more than 100 new illustrations by award-winning artist Chris Wormell—the kind of keepsake adults will want to give to young readers (while keeping one to treasure for themselves).

On Tyranny: Twenty Lessons From the Twentieth Century (Graphic Edition)

In 2017, not long after the election of Donald Trump, Yale historian Snyder published On Tyranny, a slim volume enumerating 20 instructions for those seeking to safeguard democracy: “Do not obey in advance”; “Defend institutions”; “Listen for dangerous words”; etc. Our reviewer found it “timely and essential.” Now artist Nora Krug, who won a National Book Critics Circle Award for her 2018 graphic memoir, Belonging, has added her style of watercolor illustrations, found photographs, archival materials, and collaged elements to create a beautiful graphic edition, at once admonitory and inspiring.

Black Food: Stories, Art Recipes From Across the African Diaspora

This stunning book is packed with recipes from a wide variety of chefs and writers, but it’s much more than a cookbook. To begin with, each recipe is a history lesson, as when Erika Council describes her great-grandmother baking buttermilk biscuits for laborers who’d been picking tobacco and her grandmother’s substituting butter for lard when she made the biscuits to raise money for the civil rights movement. In chapters ranging from “Motherland” and “Migrations” to “Black, Queer, Food,” there are essays, poems, and artworks illuminating the many roles food has played in the lives of Black people around the world.

Artist Alice Neel (1900-1984) feels like the painterly version of writers Tillie Olsen or Grace Paley: a mid-20th-century woman who shone a light on ordinary people of all races, genders, and ages. This catalog of her spring 2021 exhibition at the Metropolitan Museum of Art includes remarkable portraits of her neighbors in Spanish Harlem, her sons and friends, artists and critics, and a series of unromantic nudes that include pregnant and breastfeeding woman and herself at age 80.

Cooking at Home: Or, How I Learned To Stop Worrying About Recipes (and Love My Microwave)

In Chang’s first cookbook, Momofuko (2009), many of the restaurant-inspired dishes were complex. (“This is the world’s longest recipe for chicken wings. Sorry,” reads one headnote.) His new book bills itself as “a cookbook without recipes,” which doesn’t mean it won’t help you prepare dishes like bo ssäm or seafood chowder—it just does so in the context of showing you how to cook different kinds of meat, seafood, and vegetables and then figuring out what to do with them. Like Samin Nosrat’s Salt, Fat, Acid, Heat (2017), it aims to teach the principles of cooking to help the home chef get more comfortable in the kitchen.

Over 30 years of writing cookbooks, Greenspan has become a trusted friend in the kitchen. Her latest would be the perfect gift for a beginning baker—it includes recipes for a range of classics like sandwich bread (both white and whole wheat), devil’s-food layer cake, and pumpkin pie. But there are also more unusual treats, including apricot and pistachio–olive oil cake and miso maple loaf, and a chapter on savory bakes like goat cheese–black pepper quick bread and asparagus-lemon quiche. Greenspan’s recipes are clearly written, as always, and illustrated with photos so vivid you could almost eat them.

Little Pieces of Hope: Happy-Making Things in a Difficult World

Doubleday publicist Doughty is well known as a bright light in our industry: enthusiastic, effervescent, and kind. Little surprise he greeted the declaration of a global pandemic on March 11, 2020, by making a list of things to be grateful for. Another day begat another list; and before he knew it, a series was born. Little Pieces of Hope is a charming compilation of Doughty’s happy-making lists, coupled with essays, musings, prompts, quotes, playlists, and cheerful illustrations by Portillo. This book is bound to help readers have heart and find joy in their everyday lives.

Black Smoke: African Americans and the United States of Barbecue

The University of North Carolina Press, $30.00

The undersung heroes of ’cue get their due in Miller’s brilliant volume. With love, wit, and a heaping helping of research, Miller, the James Beard Award–winning author of Soul Food (2013) and The President’s Kitchen Cabinet (2017)—and longtime certified Kansas City Barbecue Society judge—celebrates the Black men and women who invented and innovated this mainstay of American cuisine. With photographs and illustrations throughout and 22 recipes ranging from “Big Moe’s Memphis-Style Chicken” to “Chef Kenny Gilbert’s Alligator Ribs,” Black Smoke is a feast for the senses.

Following in the red-soled footsteps of Phaidon’s iconic The Fashion Book (1998; 2020), The Men’s Fashion Book is a sumptuous compendium of the top designers, photographers, models, brands, retailers, and visionaries responsible for the most influential looks in the last two centuries of men’s fashion. Conceived in collaboration with men’s fashion editor Jacob Gallagher, who pens the Wall Street Journal’s “On Trend” column, this handsome, red-and-black–beribboned volume features 500 entries on attire, trendsetters, and more. The progression from suits to streetwear, how styling has changed through the decades, the rise of androgyny in menswear—see it all on display here.

San Francisco Bay Area–based photographer Moon strikes visual gold in this magnificent volume of large-scale, luminous platinum prints of the baobabs of Madagascar, Senegal, and South Africa. Nicknamed the “tree of life,” baobabs have lived more than 2,500 years; grown larger than 100 feet in circumference; stored water; prevented erosion; provided shelter, food, fiber, and fuel. But now, a yearslong drought, brought on by climate change, threatens their future sovereignty. Moon writes movingly of her travels among the trees in text accompanying these arresting images.