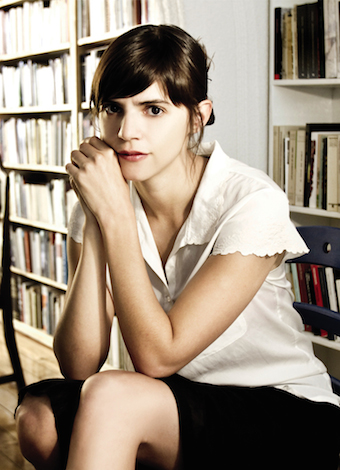 Often we think of experimental fiction in terms of hell-raising hipness. So what then to make of a writer like Mexico’s Valeria Luiselli? Though playful and unruly, her fiction feels surprisingly warm and old-fashioned, reminding me of the modernists that inform her books. After all, her first novel, 2014’s Faces in the Crowd, took its title from a famous Ezra Pound poem (you know the one) and evolved in part from, as she told Michael Silverblatt at Bookwork, an imagistic impulse. Also, the novel involves, among other things, its narrator’s obsession with an obscure modernist poet named Gilberto Owen. What does Luiselli care about hipness? Her soul does not belong to the 21st century.

Her new novel, The Story of My Teeth, unfolded from something else that seems initially old-fashioned: collaboration with factory workers, the end result of which was an art exhibition catalog. To understand this, one needs to understand the Jumex Collection, an art gallery located in the neighborhood of Ecatepec, just outside of Mexico City, and funded by Grupo Jumex, a juice factory. Luiselli was commissioned to write a piece of fiction for a Jumex exhibition catalog, and to accomplish this, she entered into a “playful” (as Luiselli calls it) collaboration with the factory workers that toiled in a world far removed from the glamour of modern art, sharing each chapter of her workinprogress with them and incorporating their criticisms and ideas into the subsequent chapter. Although Luiselli and the factory workers didn’t meet until after the collaboration was finished (someone else read the chapters to the workers after she wrote them), The Story of My Teeth seems to have two minds at work: both the high modernist mind of Luiselli and the minds of the workers. The result is, as Luiselli tells me, “very much a novel about proper names and the weight of names.” After all, intellectuals may value the art found within the Jumex Collection, but what do the names of the famous artists matter to the workers who help fund the project?

Despite The Story of My Teeth’s high concept (more conceptual than her previous books, Luiselli acknowledges), the story itself works because of the novel’s unique narrator: a man named Highway, born ugly with premature teeth. He spends nearly two decades as a Jumex security guard, never allowed to see the gallery itself, until a strange series of events leads him into the world of auctioneering. He dreams of fixing his teeth, and eventually, he gets the chance, using his auctioneering skills to buy Marilyn Monroe’s teeth, with which he fills his own mouth. But what to do with his old teeth? He auctions them off, of course, with a twist: he claims they each belonged to a famous writer or philosopher, including St. Augustine and Virginia Woolf. One of his goals is to “restore an object’s value through ‘an elegant surpassing of the truth.’ ” In other words, there is no intrinsic value in any object—just the value of Highway’s story about the object. “I do believe in the power of storytelling,” Luiselli tells me, “the way it modifies the world around us and our memories of the world.”

Luiselli is particularly interested in the way that Highway’s stories “explore the limits and boundaries between [what is true and what is false],” and in this exploration, her fiction becomes “a sort of mirror to the reader for her to meditate on her own conception of truthfulness and falsehood.” She did this in Faces in the Crowd, as its narrator, a young mother and former literary translator, seemed to find her own life blurring with the lives of great poets of the past. But The Story of My Teeth makes this boundary between truth and fiction even more porous through Highway’s elaborations, which Luiselli never judges or really even parses.

“What is true and what is not true seems to be such a contemporary obsession,” she says. “For example, readers always want to know how autobiographical a book is—how much of the author is in the narrator. They want to know if the stories you tell are true—meaning, if they happened. It’s an obsession that belongs more to readers than to writers.” (Later in our interview, when I ask Luiselli whether she shares the feelings of one of her supporting characters, a young writer, she laughs and says, “You’re doing exactly what I said before!”—as in, I’m just another reader, inquiring into autobiography.)

Clearly, philosophy informs Luiselli’s fiction, more so than Aristotelian notions of storytelling. “I didn’t go to school to learn writing,” she tells me. “The MFA system doesn’t exist in the Spanish-speaking world.” Although Luiselli writes in Spanish, she is also fluent in English (she thinks in English, she says, and she lives in New York), so part of her style emerges from massaging her prose during the backandforth with her translator, Christina MacSweeney; though she writes her fiction in Spanish, she can’t help but revise MacSweeney’s translations. “We go back and forth in this way,” Luiselli says, “until I am happy with an English version that is closer to a first version in English than just a translation.” For The Story of My Teeth, this translation process was sped up. “We were in a rush,” Luiselli says. “The publishing world is always in a rush.” As Luiselli wrote in response to the factory workers’ comments, MacSweeney translated, becoming even more involved in the process of creating the book, even going so far as to write a chronology of names and events as the final chapter. The result is a novel about art objects that, itself, becomes an art object—something that seems as suited for a gallery as for a bookshelf.

The novel’s boldest intellectual gesture comes toward its end, as Highway begins creating auctioneering stories involving a new set of names: Yuri Herrera, Alejandro Zambra, Mario Bellatin, César Aira, Álvaro Enrigue—all Luiselli’s fellow Spanish-language authors. Here, she takes these names and puts them into new situations: Enrigue is a bus driver, Herrera is a policewoman, etc. The result is a grand modernist gesture, turning these names into “empty carcasses. [Highway] could’ve said Peter Smith or John Robertson.” Here, The Story of My Teeth hits a different conceptual plane, and in reading this section, I kept wondering, is this Highway using these names, or is it Luiselli?Does Highway know the works of the great authors whose names he appropriates? “It doesn’t matter,” Luiselli tells me. “He doesn’t have to know. He probably doesn’t know. He might’ve just seen a library and taken the names randomly, copying off a bookshelf.”

Nor did the factory workers know the names, “which just goes to show how irrelevant those names are,” she says. “The literary community endows them with a weight and importance. There’s always solemnity around names and naming…a respectful awe in front of a name like Borges. The way I wanted to use these names was to put them at the level of the everyday.” Particularly interesting to Luiselli is how “different linguistic communities react to the name-dropping in the novel.” She mentions her uncle—an inspiration for Highway, in fact—who does not care about the contemporary literary world. He works in a market, selling and trading, always in possession of great stories about his objects. So when he encounters Highway’s name-dropping stories about his objects, Luiselli’s uncle doesn’t even think about the appropriation of famous names: “To him, they’re just strange little stories Highway tells.” On the other end of the spectrum, literary people “find [the name-dropping] irritating or think I’m paying homage (which is not the case) or building a literary map”—their own presumptions take over. But for Luiselli’s uncle—and for the factory workers—no such presumptions exist: they just enjoy the stories.

There is one other name Luiselli deploys during this section of her novel: “The young lady Valeria Luiselli, a mediocre high school student, stammered and overused the suffix –ly.” When I ask her about this, she says, “I thought that it wouldn’t be fair to write a series of names in the Mexican literary community…if I was just using their names and not [treating] myself in that same irreverent way. I had to be irreverent toward myself as well.”

In this sense, Luiselli’s project has yet another layer: not only has she written a book that becomes an art object, she has made herself, however provocatively, however humbly, a part of the exhibition. The modernists would be proud.

Benjamin Rybeck is the marketing director at Brazos Bookstore in Houston. His debut novel, The Sadness, is forthcoming in 2016.
MORE FEATURES
POPULAR KIRKUS STARS