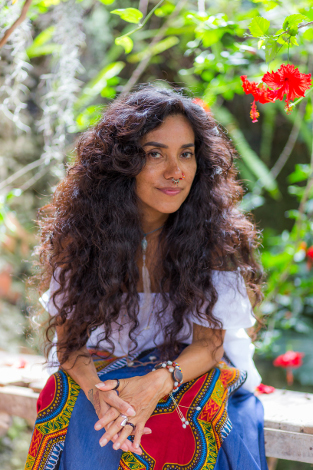 Overcoming barriers and fears is at the heart of the Yuyi Morales universe. In the Caldecott honoree’s latest, Dreamers, she daringly infuses Mexican folkloric art and culturally vibrant motifs with some of her genuine fears. Confronting her fears is something Morales does well: In Niño Wrestles the World  (2013) and in Rudas: Niño’s Horrendous Hermanitas (2016), luchador siblings combat eerie, mythical figures such as la llorona or el cucuy; more fears are represented in Viva Frida ­(2014) as famed Mexican artist Frida’s paintings, as jarring as they may sometimes be to an unfamiliar eye, are Frida’s way of expressing the things she felt, feared, and wanted. And in Dreamers—a captivating picture book recognizing her and her infant son’s voyage and personal story about coming to the U.S.—a new fear is introduced by way of Morales’ experience emigrating from Mexico.

Beautiful, colorful multimedia pages depict a heartfelt narrative as a mother-son family cross the iconic Juarez-El Paso bridge. Rupturing volcanoes symbolizing Mexico are behind the pair, indicating their departure from Mexico. With only a backpack in tow, the duo treks past buildings, past indecipherable maps, and through the door and down the aisles of a public library.

Libraries were not a major part of Morales’ childhood in Mexico, so it was only natural that she was suspicious after learning that with a plastic card, people could borrow books from library shelves and read them at home. In Dreamers, there are nods to such books as The Upside Down Boy; No, David!; Doctor De Soto; In My Family; and dozens more. Morales would walk 30 minutes to a public library, and, increasingly, she understood that despite the language barrier, she had found asylum.

Today, she recognizes that those librarians were kind, silent, observant bystanders while she adapted to and learned English. This moment of enlightenment serves as an earnest homage and love letter to public libraries and the books that stimulated Morales. But it’s also a celebratory moment as she overcomes doubt and learns to trust libraries.

Morales found inspiration for Dreamers through music and mythology. “Caminando, caminando…voy buscando libertad,” Morales half-sings the lyrics to “Caminando” by Rising Appalachia. (Walking, walking…I search for freedom.) “I was on foot all the time when we arrived,” she recalls. “We were caminantes (explorers).” Yuyi, her son, and the stroller existed as “un trío maravilloso.” A marvelous trio, until the stroller rendered itself useless from carrying the weight of so many library books.

Once her son grew up, Morales eventually returned to Mexico, specifically Xalapa, near the gulf coast. It was after returning there that she actually realized her immigrant dream. Because of her batlike journey—up through the States and back to Mexico—she calls herself “a constant immigrant.”

Morales’ art is intentional, emotional, and layered. Take, for instance, the skirt the mother wears in Dreamers. Morales fashioned the skirt from craft and crepe paper. In legendary myths, some Aztec goddess names describe the skirts they wear (skirt of stars, skirt of serpents, etc.). In Dreamers, Morales offers a mother donning a skirt of papers. For Morales, “this paper or tissue skirt is reminiscent of the costumes Mother would make for school festivals and celebrations.” Among other ideas, the skirt signifies weaknesses. The weaknesses for the mother in the book are her struggle with a new language.

“At some point, one realizes that a lack of something is your strength and resilience,” Morales says. “For me, paper became one of my greatest treasures: It’s how I create, it’s how I write, it’s how I paint, it’s how my books are made. What I thought was a great weakness as a child is in fact a characteristic of resilience.”

Sara Ortiz is the program manager at the Believer Festival.Dreamers is published simultaneously in a Spanish edition, Soñadores. This interview was conducted in Spanish and translated.