Adventures in Self-Editing: Why You Need *That* Comma 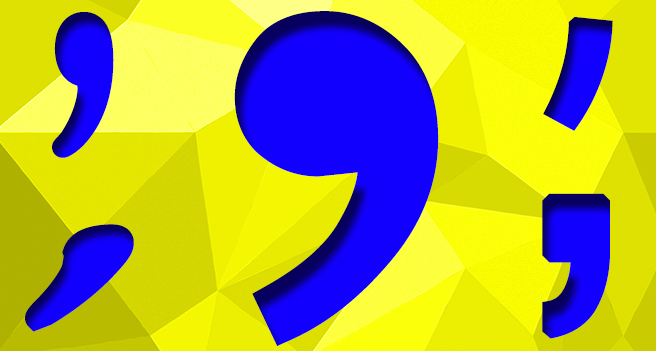 Since we launched the Kirkus Writers’ Center, we’ve posted a few articles on various comma usages—most of them centering around consistent application of The Chicago Manual of Style’s rules. But we acknowledge that even though that’s our level of nerdiness, most writers just shrug. After all, that’s what an editor’s for, right? Doing the manuscript housekeeping so you don’t have to. We get it. (And we appreciate the work.)

While many applications of the comma can be chalked up to style-manual nitpicking or author preference (“pause commas,” anyone?), there are a handful of very important cases where the use or omission of a comma actually changes the meaning of the sentence—causing confusion and even embarrassment.

1. The Serial (or Oxford) Comma

The inspiration for many Associated Press vs. Chicago style gang-violence jokes, these hardworking commas are worth fighting for. Now that pretty much no writing is being measured in column inches, there’s no reason to exclude the serial comma when all it does is aid clarity. Don’t believe me?

With the comma, we have a lovely dedication to the three most important influences in this author’s life:

This book is for my parents, my agent, and God.

Without the comma, the author is claiming divine parentage:

This book is for my parents, my agent and God.

In direct address, we place a comma before or after the name (or title) of the person being spoken to. If you leave the comma out, things can get very violent …

Calling your family to dinner:

Or going a little Jonathan Swift:

Comma mistakes around emphatic words—those that aren’t essential to the sentence but are used colloquially or to stress an idea—aren’t nearly as disturbing, but they still change the meaning of your sentence. They can be mistaken for stylistic “pause commas,” but they’re not. For example:

In this case, “Now” is an emphatic—it could be replaced with a similar word like “Listen” or “OK”—meant to signify that what the speaker is about to say is important.

Now I need you to do me a favor.

Without the comma, “Now” becomes essential to the meaning of the sentence. The speaker means “I need you to do me a favor right now.” Let’s look at one more.

Of course, I’d never invite her to the wedding.

In this case, “of course” is the speaker reiterating what the listener already knows; they’re both acknowledging that the speaker would never send that invitation.

Of course I’d never invite her to the wedding.

Without the comma, the speaker is making a strong assertion—the tone is more defiant and contradictory. You actually think I’d invite her? Of course I wouldn’t. (You can almost hear the italics in that sentence above.)

Other emphatics to be on the lookout for are Then and Oh.

When adjectives sit side by side in a sentence, writers tend to panic: Do I need a comma or don’t I? The trick we use here is that you only need a comma if inserting “and” would also make sense, or if you could flip the order of the adjectives and the sentence would still sound good. Before you throw your hands up in frustration and start chanting, “When in doubt, leave it out!” double-check that doing so won’t alter your intent.

No comma calls into question the safety of her lodging: it’s pretty safe … compared to a castle in Transylvania.

Much better. Now what we’re communicating is that her apartment is pretty and safe.

In this final case, names are used in apposition to another noun in order to clarify or elaborate. Commas signal whether the person, place, or thing in question is the only one; if no commas are used, that means it's one of many. Here are a few common scenarios.

My mother, Ellen, was present for my graduation.

The speaker has only one mother, and the commas signal that you can remove her name (Ellen) and still know exactly who the speaker is referring to. Contrast this with:

Without the commas, Thomas's name becomes essential to the sentence. We know immediately that the speaker has more than one brother; if you took Thomas’s name out of the sentence, we wouldn’t know which brother the speaker was talking about.

Here’s one more example that we often have to query for authors:

So there you have it. The Chicago Manual of Style has no fewer than 40 rules regarding commas—which no one but an editor is expected to memorize—but these 5 aren’t too hard to pick up. For all the rest, we’ve got your back.

—Lauren M. Bailey is the director of Kirkus Editorial.