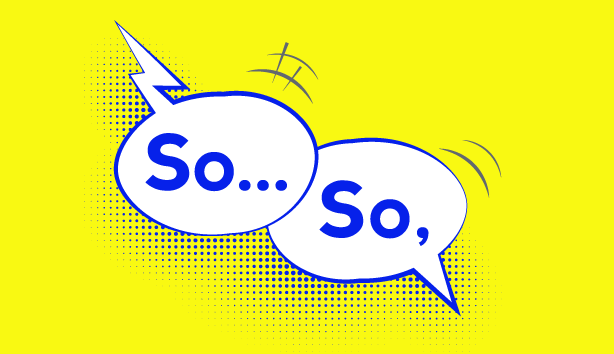 Q: Every time I see the word so at the start of a sentence, my instincts (and Word's grammar check feature) tell me to add a comma after it. But placing commas after the words but or and would look crazy, and I would never do that. So I'm confused...Is so special or should it be treated the same as but or and?

A: We can relate. The grammar check's insistence that every so needs a giant, throat-clearing pause trips us up all the time. Although so is a useful and congenial conjunction, it is not special. In most cases, it should be treated the same as other coordinating conjunctions (but, and, yet, for, nor, and or). So no comma is needed.

The Chicago Manual of Style is so against adding commas after these terms, their advice is to use an ellipsis or em dash if a pause is warranted after so (as it is sometimes in dialogue).

So…let’s review. These examples would not take a comma:

So we’re dropping that subject.

And we’re not talking about it anymore.

But we still love you.

Don't overcorrect, though, and start pruning adverbial conjunctions like however and thus. Those still need their commas:

However, she continued the conversation.

Thus, I had to leave.

Lastly, you may need to retain the comma after so when the conjunction is followed by a parenthetical phrase—where there’s an interruption in the train of thought. However, this comma is sometimes optional, usually depending on how disruptive the phrase is and whether it can be combined with the introductory conjunction.

So, despite my best efforts, we discussed it.

With a different conjunction, the comma could be dropped:

And despite my best efforts, we discussed it.