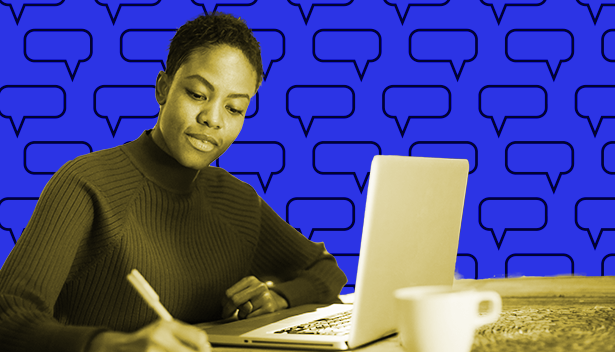 Whenever I talk about editorial work with groups of college students or writers, I always get asked about common errors I see in the manuscripts we edit. One of the most pervasive issues is the punctuation surrounding dialogue. These typos are particularly important to correct because, while your reader may not have memorized every rule of dialogue formatting, our brains know enough from all the quoted material we encounter each day to immediately recognize that something is wrong. Poorly punctuated dialogue contributes to a reader’s overall impression of a sloppy book.

The good news is that the rules are actually pretty simple, and once you know them and make an effort to apply them, they start to become automatic while you write. And even if you slip up, most of them can be caught with a series of search-and-replace fixes.

To help make your manuscript the cleanest it can be before you submit it for publication, I’ve compiled a “cheat sheet” of rules, starting with the simplest ones and working up to some snazzier styling to really make your dialogue smooth.

1. At the end of a line of dialogue, you should use a comma rather than a period before a dialogue tag, and it goes inside the closing quotation marks. The first letter of the first word in the dialogue tag is lowercase.

“English grammar is fun to learn,” your teacher insisted.

2. If the dialogue tag comes in the middle of a sentence, commas should be used on either side of the tag.

“English grammar is fun to learn,” your teacher insisted, “if you don’t let it stress you out.”

Be careful not to confuse this with the treatment for two complete sentences, though. You use double commas only when one part can't stand on its own. Contrast the sentence above with the following:

"English grammar is fun to learn," your teacher insisted. "Don't let it stress you out."

In this second sentence, what follows the dialogue tag is its own complete sentence rather than a continuation of the first sentence.

3. If the dialogue tag is at the start of your line, the comma goes right after it.

Your teacher insisted, “English grammar is fun to learn.”

4. If your line of dialogue ends with a question mark or exclamation point, those are not replaced with a comma, but they also belong inside the quotation marks.

“English grammar is fun to learn!” your teacher insisted.

“Don’t you think English grammar is fun to learn?” your teacher asked.

5. Every time a different character speaks, a new paragraph should be started.

“English grammar is fun to learn,” your teacher insisted.
“Actually, it sort of stresses me out,” Bobby offered.
“I bet it wouldn’t be so bad if you actually studied once in a while, Bobby,” Sue teased.

Allowing each character's dialogue to begin his or her own paragraph helps your reader keep track of who's doing the talking.

Here’s where it gets a little trickier…

Beyond mistakes to the basics, a common error we see is sentences tacked onto dialogue that aren’t actually dialogue tags; instead, they’re separate physical actions.

Now, it’s true that just using “he said” and “she said” over and over gets boring, and it’s tighter writing to say something like “she insisted,” rather than “she said insistently.” But words like insisted, exclaimed, and inquired are all just descriptive synonyms for said or asked. So those are still vocal actions that qualify as dialogue tags.

But when the verb in the sentence before or after the line of dialogue is an action rather than a vocal act like said or asked—something like laughed, shrugged, pointed, or smiled—you need to start a new sentence. For example:

“English grammar is fun to learn.” The teacher smiled.

You can’t technically smile a spoken sentence, so it’s not a dialogue tag; it’s a descriptive physical action. (Think of the distinction as body language vs. spoken language.) Contrast this with:

“English grammar is fun to learn,” the teacher said with a smile.

Here, you use the punctuation for a tag, because said is the verb.

“I don’t think I’ll ever be able to keep the rules straight.” Bobby sighed.

Use the period, because you can’t technically sigh out a whole sentence. Or write:

“I don’t think I’ll ever be able to keep the rules straight,” Bobby said, then sighed.

Some editors do let sighed go, along with verbs like grunted and huffed and laughed, arguing that they describe the tone of the speech. But my advice is to ask yourself if the character could technically say the sentence using the verb given. For example, a mafia goon could possibly grunt a one-word response to his boss (“Yeah,” he grunted.) but he couldn’t grunt an entire sentence, right? The snotty Mean Girl in your YA novel could laugh out maybe one word, but she'd have to breathe again before she could speak a whole sentence:

Here’s my paraphrase: If a character performs an action in the middle of a line of dialogue, the action is set off by em dashes—a long dash approximately the width of the capital letter M—which go outside the quotation marks. (For those of you who haven’t discovered the em dash, this most glorious bit of punctuation, it’s the dash that’s usually autoformatted by Word when you type two hyphens together. It can also be found in the Symbols menu or created with alt + 0151 on the number pad of a PC. For a Mac, it’s Command + Option + hyphen.)

“These grammar rules are confusing”—Billy pointed at his English book—“and I don’t think I’ll ever learn them all.”

I often see a line like this tacked on as a tag: “These grammar rules are confusing,” Billy pointed to his English book, “and I don’t think I’ll ever learn them all.” But because the “tag” is action and not speech, Chicago favors em dashes to set it off.

This is also handy if you want to note a change in tone or describe the way a line is delivered in a more in-depth way:

“English grammar is fun to learn”—her voice rose with excitement—“if you don’t let it stress you out!”

Or when one character interrupts another:

“I disagree,” Bobby interrupted. “It stresses me out.”

Kinda cool, huh? Once you learn the sudden break rule, you’ll notice it in the books you read and you’ll find it useful in your own writing. It’s one of those stylistic devices that can save your dialogue from becoming pages and pages of he said … she said … he said.

—Lauren M. Bailey is the director of Kirkus Editorial.