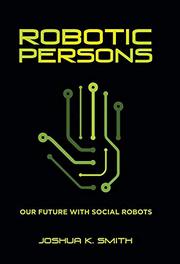 Despite predictions since before the 1960s regarding a future that consists of robots, this book argues that evangelical thinkers have failed to meaningfully address “the existential and anthropological risks” associated with artificial intelligence. Not only do evangelical assumptions about the imago Dei (“image of God”) “hinder their engagement” with contemporary philosophical and ethical debates surrounding AI, but the long “cold war” between Christianity and science has disengaged many Christians from even considering the topic as worthy of meaningful conversation. As a pastor with a doctorate from Midwestern Baptist Theological Seminary, Smith is well versed in evangelical philosophy and doctrine and combines his religious background with a contemplative discussion of modern scientific ethics. Rejecting Luddite approaches to technology common within certain branches of evangelicalism, Smith’s main argument, based on the natural rights philosophy of Aristotle, Locke, and others, paradoxically suggests that “the best way to advocate for human rights” in a world with AI is to provide “legal personhood” to those very robots, which would serve as a “bulwark against dehumanization.” With a strong grasp on both Christian ethics and current trends in AI, Smith offers evangelical readers nuanced perspectives on the history of robotic futurism and the potential benefits, and ethical pitfalls, of AI. On automated warfare, for example, the author posits that the use of AI might “minimize collateral damage” and provide humanitarian and medical aid to combat zones. Though more than willing to call out fellow evangelicals for their failures to participate in a central ethical debate of our era, the book holds to many conservative stances common within religiously conservative circles, particularly regarding sexuality. The book’s discussion of sex robots will, therefore, alienate many readers with its rejection of “sex as a social right” and its descriptions of queer lifestyles as “sexual pollution” and “perversion.”