Mr. Nicholas lives in Los Angeles, California. "Naked Lies the Truth" is the first of a series of novels featuring Detective Mathieu.

“An entertaining and atmospheric detective story with a noir feel. The fast-paced action features unexpected twists that add complexity but not confusion, and the dialogue is brisk and often amusing." - Kirkus”
– Kirkus Reviews 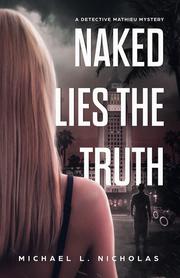 In 1929 Los Angeles, rookie motorcycle cop Theo Mathieu, responding to a report of a domestic disturbance, unexpectedly finds the unclothed body of a young White woman, shot dead in the home of respected Black jazz musician Paul Thornton. Mathieu quickly surmises that Thornton didn’t do it, and the cop’s ensuing investigation leads him all over the city. The victim, Irene Simpson, was the private secretary of one of the most powerful men in LA—a newspaper mogul who also happens to be Mathieu’s godfather. The racist detective squad focuses on the city’s Black residents, willing to beat any number of suspects, including Thornton, until they get a confession. Mathieu is disgusted by their tactics and determined to track down the real killer by following the evidence. He finds clues that LA police detectives overlooked, and his good looks and charm win over even the most reluctant witnesses. But the more he finds out about Irene, the more of an enigma she becomes. How did a young woman raised in an orphanage acquire several luxury cars, extensive real estate holdings, and secret connections to wealthy and prominent men? And why does Mathieu feel so personally invested in the case? Despite a few jarring anachronisms—door buzzers and hedge funds weren’t invented until the mid-20th century, for example—Nicholas’ depiction of the LA setting provides a vivid sense of place, encompassing the soundstages of Hollywood and the streets of Chinatown. It’s a city where new development is booming and everyone has a hustle. The fast-paced action features unexpected twists that add complexity but not confusion, and the dialogue is brisk and often amusing. Though young and inexperienced, Officer Mathieu is smart, open-minded, and kindhearted—but also dogged, tough-minded, and cleareyed about human nature. It will be intriguing to see how this promising new series develops.

An entertaining and atmospheric detective story with a noir feel.