Max Davine is the author of six novels and holds a Master of Writing and Literature. His most recent book, Mighty Mary, received a Gold Global eBook Award and an honorable mention at the New York Book Festival. He studied at the Melbourne Actor’s Lab and has also written for the stage and screen. He currently lives in Melbourne where he volunteers at the Fire Brigade and Coast Guard.

“Davine channels a tremendous amount of research into this drama about a pivotal era in North American history. Vinland itself becomes a vivid presence in the story. A well-crafted, if exceptionally violent, tale of conflict.”
– Kirkus Reviews 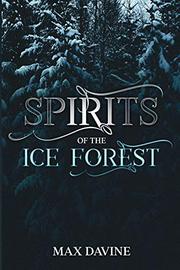 SPIRITS OF THE ICE FOREST

In the 10th century, Straumfjord is a Norse settlement in Vinland, founded by Icelandic explorer Lief Eiriksson. The Norse chieftains, who battle over newly settled territories in the area, such as Markland, must also contend with the skraelingjar, or savages, their term for Indigenous people. The latter live lives in harmony with the seasons, and they remain wary of the “Pale Ones,” who enslave people. When Indigenous teenager Madawaak sees the settlers slaughtering each other, he reports back to Oonban, his tribal elder. (Madawaak is in love with the man’s teenage daughter, Demasduit, who likes to hunt, which isn’t a traditional activity for women in her culture.) Oonban and the other village elders realize that upheaval is imminent and that a confrontation may be inevitable due to the Pale Ones’ growing presence on the coast. A raid on Straumfjord nearly succeeds before Freydis Eiriksdottir, Lief’s half sister, returns from exile. She’d been banished from Vinland after murdering women and children against explicit orders. Now she wants Vinland to launch a new Norse empire, safe from the encroaching cultures of Europe. Although she’s unpopular among the settlers, Freydis wins Gunnlogi, her brother’s sword, through trial by combat. She promises to eliminate or enslave the skraelingjar, but after Mooaumook, one of the Indigenous people, is captured, Freydis makes him a promise instead. Eventually, Oonban believes that he must marry Demasduit off to his people’s longtime enemies, the Farther People, in order to create a pact against the Pale Ones. Soon, the strong-willed Demasduit’s fate becomes entwined with Freydis’.

Davine channels a tremendous amount of research into this drama about a pivotal era in North American history. Vinland itself becomes a vivid presence in the story due to lines such as “The Broken Lands...got their name because of the way the ocean jutted into them. Cut deep swathes of churning brine into the open grassy plains and craggy hilltops.” There are also moments of culture shock that will fascinate readers, as when Mooaumook wonders of the Pale Ones’ horses, “How does one tame a nonhuman being?” The stories of Demasduit, Mooaumook, and Madawaak provide the emotional center of the narrative, but over the course of the novel, Davine’s character arcs lean toward darkness, denying many people safe endings, except in cases in which it’s least expected; in this, the author courts George R.R. Martin's audience, as the violence—and the pervasive bleakness—will strongly remind readers of A Game of Thrones (1996). There are scenes that depict rape and molten steel poured down someone’s throat as well as battles in which “Giant axes…cleaved [people] down their shoulders and split their necks or their chests.” Detailed gore isn’t out of place in a war novel, but the gratuitous descriptions become fatiguing, and what begins as an adventure ends up creaking under the weight of a grim realism. Still, Davine’s work is often effective, although he rakes readers over the coals for the denouement.

A well-crafted, if exceptionally violent, tale of conflict.

Ineke Valence: Single mother of one. Blond. A drinker in spite of prohibition. Resident of Staten Island. The Angel of New York: The law's gun for hire, the one they send when the job gets too risky, a thief, or bodyguard, or murderess... A former spy of the Russian Revolution. During the last months of the Roaring Twenties, one woman must play both roles. But when her NYPD contacts throw her a job that's close to home, she finds the lines between the two alter-agos beginning to blur, and her daughter's life in jeopardy. She travels to the small northern city of Rochester to crack the case before the mob cracks her identity, but what she finds will put her violent, tragic history on a more dangerous collision course with her delicately balanced present than she could ever have imagined.
Published: Aug. 20, 2013
ISBN: 0992328500

Jimmy Reeves is a down on his luck wildlife wrangler, his career once saw him traveling the globe, working on relocation programs and starring in documentary films. Now, he and his business partner Paul Franciscus are lucky if they can get a gig wrangling bulls in Arizona. Until one day, when they receive a massive advance payment from a mysterious company based in Florida. In return, they are to do what once brought them glory the world over; trap and relocated endangered animals. Little do they know they're not going to the Everglades to trap alligators, they're going through time and space to rescue great, big dinosaurs! But others have come to pillage the Cretaceous world for it's natural resources, and to enslave and exploit the prehistoric inhabitants. They are ruthless, they are well equipped, and they will stop at nothing. It's up to unwitting Reeves to make a stand not just for the dinosaurs, but to save his own life, teaming up with an alluring paleontologist and a helicopter pilot nicknamed “Crash” to save the land of the forgotten from human annihilation.
Published: April 2, 2015
ISBN: 0992598273

Mary was a circus elephant. The Star of the West. She could dance, play the trumpet and pleased crowds wherever she went. In 1916, after a disastrous Wild West show in Erwin Tennessee, acts against Mary the five-ton Indian elephant would go down in history as one of the most disturbingly bizarre cases of animal cruelty the world has ever seen. But, Mary had a life before the circus. She was free once. Part of a wild herd. During the British Raj, she was captured, trained and sent to America to become a spectacle. Along the way, she loved, she lost, she made friends and formed bonds. She suffered heartache and experienced ecstasy. She was a living being.
Published: Dec. 3, 2018
ISBN: 1644673398

By 1873, long since the Golden Age of pirates and swashbuckling adventure, the oceans, it's said, were tamed, at least that's what young French orphan girl Chanel Angeli thought when she settled down and married into a rich mining family by means of their charming, gorgeous heir Oliver Aubry. Until, that is, Oliver accepts a business proposition from his old mentor Lord Beaumont, who has begun excavating an island in the Azores Archipelago that holds many mysterious and deadly secrets. When Beaumont betrays and enslaves Oliver on the isolated piece of land, which is thought to be capitol city of Atlantis, Chanel escapes and teams up with the devil-may-care captain of the Margeaux, endeavoring to rescue her husband, but along the way she finds, within herself, uncovering many mysteries of her own...
Published: Sept. 14, 2014
ISBN: 0992598222

1885. A ten year old boy is missing. His twin sister encounters a strange old man in the woods near her house. He seems infatuated with her, and displays unusual control over the world around him, over the events to follow in her life. She is Michelle Augustine, and from this day to her adulthood, the turn of the century, to Australian Federation, from poverty to comfort, love to loneliness, violence to peace and all the passion, joy, death and destruction her life will influence he and his sinister connection to her will never be far behind.
Published: Nov. 5, 2012
ISBN: 1481093134

Prohibition is over, closing the lid on half the crime in New York. Wall Street has crashed, opening it up for a whole new breed of criminal to roam the city streets...not that it's Ineke Valence's problem anymore. She has long since hung up her revolver, replacing it with a soda bottle, her red scarf with a barmaid's threads. That is until her old nemesis from the force Sergeant Fielding decides to make it her problem, framing her for a murder and then setting her up to fall hard. Valence moves quickly to bust the case, but when an old associate from her days as a Bandita down in Mexico resurfaces bringing omens of ill for her, and then someone makes the fatal mistake of kidnapping her daughter Elysia. Valence heads to Mexico to retrieve her, the line between Ineke and Angel never so stretched, never so close herself to becoming what she has always feared.
Published: May 12, 2014
ISBN: 149953857X