J.W. helps catch naughty folks for the Government. He's sailed through the Suez Canal twice and hunted pirates in the Persian Gulf. He's climbed to the top of Mount Fuji and been kicked off Mount Rainier. He's taught English Conversation in Japan, and can analyze anyone's handwriting. And he's successfully run in the Walt Disney World Marathon as a woman.

When he worked at the FBI, his thesis on Red Flag Behaviors Found in Relationships, earned him an invitation to present a paper at the First Annual Forensics Congress in China, which led him to write his award-winning book Naughty or Nice - Whose List Are You On? available as a handout during lectures.

He co-authored the bestselling book, The Happiness Code with Ray Brehm, and other authors, who all share their personal happiness hacks you can use too.

And His latest book, The Devil Pulls the Strings received the Literary Titan Award, the International Review of Books badge of achievement, 5-Star Reviews from Book Viral, Chanticleer, Literary Titans, and individuals on Goodreads.com, Amazon.com, and Audible.com. 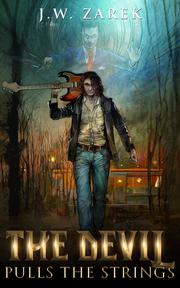 THE DEVIL PULLS THE STRINGS

In this supernatural novel, a small-town musician fights to stop a diabolical group from summoning the devil and destroying New York City.

Boone Daniels, a handyman at a Missouri trailer park, spends nearly half the year working at the St. Louis Renaissance Festival. During a joust one day, he accidentally injures his friend/opponent Flynn Michaels. So Boone agrees to do him a favor—cover as frontman for Flynn at his medieval rock band’s upcoming New York gig. Boone’s first stop in New York is the home of the band’s patron, whom the Missouri musician immediately watches plummet to his death. Boone simultaneously saves the dead man’s assistant, Sapphire Anjou, and the two flee an unknown trio of armed thugs likely responsible for the patron’s demise. The culprits are after sheet music, specifically Paganini’s. Combining three of the 19th-century Italian violinist’s compositions with a strange “bluish-green glowing liquid” unlocks a secret song and a summoning spell. Cursed immortal Ambrozij Sinti, in cahoots with an ancient, evil secret society, plans to use the spell to call forth the devil, a ritual that will ultimately wipe out the entire city. Boone and Sapphire vow to track down the Paganini pieces and the strange liquid to prevent Sinti from completing the ritual. It’s a dangerous endeavor, as it also requires summoning the devil, who will, according to research, grant a wish. Battling Sinti will pit Boone and Sapphire against preternatural creatures, such as vampires, while the hero comes with his own set of problems—a wendigo has stalked him in his waking dreams since he was 6 years old.

Zarek packs his entertaining story with intriguing characters, including historical and mythological figures. Along with Paganini and the wendigo, there’s Baba Yaga, a supernatural being who will either help Boone or possibly eat him. The extensive cast, coupled with the increasingly complicated plot, is difficult to keep track of. Fortunately, the author isn’t afraid to decelerate the narrative for illuminating discussions. For example, characters meticulously explain things, like villains’ identities and motives, and Boone tends to recap what’s happened or summarize his and others’ plans. The abundance of players never overwhelms the tale; even a minor character, the unnamed lead thug chasing Boone and Sapphire, proves distinctive, always donning an instantly recognizable fedora. As if a magic-filled, present-day New York wasn’t enough, the story also involves “portals powered by time crystals.” Indeed, one character travels to the early 1800s and completes a series of harrowing tasks. Recurring action sequences rev up the pace with sharp, clipped sentences; Zarek also fittingly provides grisly details about the chilling wendigo: “The creature has massive antlers covered in caked blood and desiccated skin unable to cover all its exposed bones.” Since this book launches a series, certain narrative elements remain a mystery; Boone has “uber-vivid dreams” that seem to be psychic visions. Likewise, specifics on his parents’ disappearances, around the time the wendigo originally targeted him, are minimal. But this first Boone-centric volume sports a frenzied final act and a gratifying conclusion.

The Devil Pulls the Strings

“The answer to the ultimate question of life, the universe and everything is 42.” — Douglas Adams, The Hitchhiker’s Guide to the Galaxy

THE DEVIL PULLS THE STRINGS: The International Review of Books Badge of Achievement, 2021

Do you know anyone who seems "chronically" happy? How do they do it? Is it really as easy as a group of small habits? You may already have access to all you need. If you want to control the level of happiness in your life, then this may be the most important book you read this year, here's why … But first a warning: Despite most people desiring to be happy, many will overlook the simple principles in these pages. If you tend to look at ideas and say things like I already tried that or that won't work for you may want to pass on this book. The principles in this book are at your disposal right now, but some of them take time to implement in your life. If you are impatient, or looking for a quick fix, this book probably isn't for you. On the other hand, if you are willing to approach these habits with an open mind, you are bound to find more than one way to change your outlook on life right away. Happiness is considered by many as a choice. It's not always easy to see that, but with small changes in daily habits and adjusting your thinking, you will be surprised at how things can change. We asked over 20 experts to describe their most successful "happiness" habits for us, and the result was The Happiness Code. The Happiness Code is a life lesson of habits, mindsets and stories of how they have been used to create fulfilment. It's more than just about habits though.... Don't Make This One Mistake That Can Delay Your Quality Of Life You Need To Accept The Level Of Happiness In Your Life Right Now, Right??? WRONG! When It Is OK To Choose To Put Yourself First How To Leverage Hobbies To Reach Your Dreams Where To Find "Happiness Hacks" In Your Life How To Eliminate The Causes Of Down Days Quickly Why Learning "Doable Happiness" Works As A Pathway To A Content Mind Don't sweat the small stuff? NO! Learn why you should! Think Happiness Is Unrelated To Science? Think again.
Published: Sept. 29, 2021
ISBN: B08KTDR5PQ