Ak’Krone floated blissfully around an old star. He could have chosen any other galaxy with a younger sun and recharged rather quickly, but then it wouldn’t be a vacation—more like a business trip. Besides, this particular star faithfully emitted the type of e-cocktail that was just right for him. It was warm and not hot, steady with an evenly paced radiation flow as opposed to young stars that spat their by-products whenever they felt like it. And location was everything.
Unlike other vacation destinations that were always full of disturbing meteorites, gassy and dusty nebulae, and worse yet, some oddly polarized dust colonies that moved and behaved like sound waves, deceiving Infinities’ senses (only Infinities could hear them. Is it a curse or what? Ak’Krone thought), this part of the galaxy was a relatively quiet place. Now and then, he observed a ship from a nearby planet heading deeper into space, but it didn’t trouble him. He was invisible and undetectable to anybody—even to his own Infinities.
While bathing in the warmth of his star, his thoughts drifted lazily from here to there, stumbling and crawling onto each other, then melting slothfully away under the indolent and steady heat of the old sun.
He deserved this idleness...

"The Fledgling", excerpt from Chapter 9

I wrote for the first time when I was nine. It was a poem, a half-page long. I wrote it in cursive as neatly as a nine-year old could. That way, my grandmother would be able to read it. Or I’d be able to read it to her fluidly without “ums”, since it was written so clearly.

My grandma glanced at it. “If you keep at it,” she grumped, “you’ll be cleaning toilets for living.”

That’d be a horrifying profession, I thought, shuddering. I had a hyper-sensitive sense of smell and could detect the stench of mildew and waste carried shamelessly by our nineteenth century crumbly building’s drafts, and by impudent winds blowing through a tiny window leaf of our apartment. (I could’ve been a hound in one of my past lives.)

I must have wiggled my nose excessively because my grandma said that I’d be better off as a professional sniffer…the way I study at school and the type of books I read, I’d never get into a college. “You’d be sniffing shit for kopeikas,” she snapped. “Here!” she pointed her thick, straight index finger with a pale-rose nail polish at the volumes of Pushkin and Lermontov on our bookshelves, “you can get a head start.”
I didn’t want to read Pushkin and Lermontov—they sounded too rhymey, which felt like a rolling pin working through my grey matter, flattening anything that was once three-dimensional. I also didn’t like the fact that Pushkin and Lermontov died senseless deaths at a young age—stupid duels.

Regardless, I loved fairytales and science fiction and fantasy and anything that had nothing to do with the world in which I lived. But go and try convincing my grandma that Alexander Beliayev, Fredric Brown, Asimov, and Arkady & Boris Strugatsky, to name a few, were as good as Chekhov, Dostoevsky, and Gogol. It’s like trying to prove to her that the WWII was won in collaboration with other nations. “Stalin and Russians won the war,” she’d say, “period!”

So I kept my prose and poems to myself, writing them in my head for over thirty years until I’d begun running out of terabytes in my memory. That was a surprise, since I always believed that the human mind was a limitless repository modeled after the universe’s infinite expanse. I guess anything ethereal or material that’s confined to a box, a.k.a. a skull, is bound to run out of space sooner or later. This fact compelled me to start putting it all down on paper. Hence, you are here. Welcome! 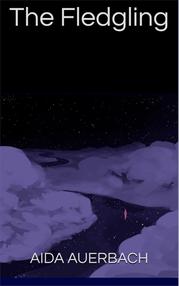 A human and two unusual beings from a race of guardian energies grapple with one another in Auerbach’s SF novel.

Throughout the cosmos, sentient beings and their civilizations are protected by the Light Infinities of Intrigue, Justice, Love, and Time. Locus—the Dark Infinity—roams space to protect Universe, who is a character here, chiefly by destroying black holes. Unique among the Infinities, Locus is ruthless toward “biologicals,” as he calls sentient creatures, squeezing out their energy and often leaving them wounded or dead. Waking from a period of hibernation near Earth in the year 2052, Locus urgently needs to refuel via the planet’s biologicals. At the same time, Infinity of Love is on Earth responding to a Caller, one whose need for healing has reached her through the cosmos. Like biologicals, Love is in danger from Locus, so when she senses his presence, she takes cover. Darius, a human whom Love recognizes as “the Nucleus,” witnesses their confrontation and is drawn into it, leading to a real and metaphorical journey that all three must take to understand themselves and their collective true purpose. In her debut novel, Auerbach intriguingly steps beyond the human perspective to imagine truly alien life-forms. The characters can be off-putting, though—often remote, unlikable, or overtaken by puzzlingly extreme emotions. For example, to prove she’s different from Locus, Love prevents Darius from continuing to see the true Infinity form—that of a luminous entity—and appears instead as what others see, a petite young woman. He explodes at this with screaming rage. Oddly, Love sympathizes with his reaction. The end provides some helpful context but perhaps too late.

Original, but too often overwrought and perplexing.