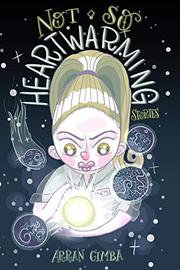 NOT SO HEARTWARMING STORIES

Most of the tales in this book are no more than a few pages in length, but they show the author’s knack for finding unorthodox angles on familiar subjects. In “Beginning,” for instance, two cosmic mechanics craft universes in a workshop. Another tale, “Fifteen Percent,” shows the powers of Light and Dark singing the world into existence only to be interrupted by a talent scout who promises to make them big stars. In “Inspiration,” an accomplished writer reveals to a former classmate the dark secret behind his success only to receive a much-deserved comeuppance. A barfly turns out to be a hero of a fantasy realm in “Tall Tales.” In another story, a young man named Max Zane tries to learn the family business of villainy, and the story becomes more interesting as readers’ sympathies align with Zane and his fellow bad guys rather than with the sanctimonious, dimwitted heroes. “I Have a Cunning…” tackles similar themes, as the main character acts as a consultant for an unusual clientele: “He was the man that evil masterminds went to once they found out that they couldn’t quite live up to the second half of the job description.” Although Gimba’s stories can lack emotional heft and don’t create much sense of consequence, they’re often pleasant diversions. Many act as showcases for their author’s voracious imagination, which metabolizes tropes of fantasy, fable, and film to create enjoyable vignettes. The collection’s title is a bit of a misnomer; although the stories display a biting sense of humor, they also have an air of hopefulness, showing great affection for their characters and offbeat worlds. At times, reader may crave a story that isn’t so intent on reinventing existing genres, but at best, the results are charming, as if one is reading a script for a fantasy-based sketch-comedy show. 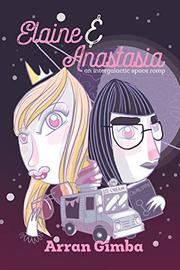 A princess and her long-suffering assistant explore the galaxy in this SF novel.

Elaine Durowich is a handmaiden to Princess Anastasia, the pampered, only daughter of the Greater Galactic Emperor and Empress. When Anastasia gets her heart set on seeing what’s outside the palace, Elaine has little choice but to tag along with her. The timing is hardly ideal, as the newly divorced Emperor and Empress are waging war against each other, and antiroyalist rumblings among the populace are getting louder every day. Nevertheless, after Anastasia falsely claims that her dad approved of the trip, she and Elaine set off on a journey to alien planets, including glitzy Paartay, which is effectively one giant rave, and Dump, a colony of rebellious teens who stage ridiculous, gladiator-style fights. The royals’ unpopularity puts a target on Anastasia’s back, so she and Elaine try to keep low profiles via aliases and disguises with varying success. After meeting a dashing revolutionary, Anastasia and Elaine stow away with a crew of geeky space pirates and even meet an intergalactic mob boss on planet Vegas. Things get more complicated when the Emperor and Empress disappear, leading the Empire’s top general to label the princess’s trip a kidnapping. By now, Elaine and Anastasia are also being tracked by alien assassin Mirret and her bloodthirsty “teddy bear”accomplice. Gimba, the author of Not So Heartwarming Stories(2019),has written a refreshingly zany work that has the potential to become a cult classic. The witty, third-person narration takes aim at everything from fandom culture to materialism and inequality, but it never takes a tone that feels preachy. Instead, Gimba delivers refreshingly funny dialogue and fresh worldbuilding. The leads are genuinely likable and don’t feel focus-grouped: Princess Anastasia is hilariously flighty and spoiled but ultimately kindhearted, and Elaine, the older and more levelheaded of the two, is as blunt as her bob haircut, but softhearted enough to pursue a possible love interest.

An offbeat and enchanting space adventure. 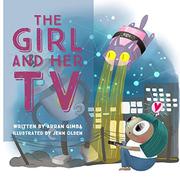 THE GIRL AND HER TV

Glued to her TV screen, a little girl misses fantastical events happening around her in this picture book.

Wild and silly things occur right outside a girl’s window, but she is oblivious. Lounging on her couch, she is “so consumed” by her favorite TV show that she’s not aware of Cupid’s unfortunate, painful encounter with a tree in February; a leprechaun chase in March; and skateboarding grannies in September. Month after month, the girl chooses her TV show over family and friends, ignoring Mother’s Day and Father’s Day; missing the Easter Bunny, fireworks in July, and Santa’s emergency sleigh repair; and even disappearing from her own birthday bash. (“The little girl didn’t mean to flake / But got distracted by the TV when she came in / for a bathroom break.”) Some young readers may question why Mom and Dad don’t pull the plug, but comical exaggeration with a light touch gets the point across about the downside of passive screen watching as the world outside passes by. This work is the third installment of a picture-book series by prolific SF and short story author Gimba. Illustrator Olsen depicts the tale’s characters as round, big-eyed, and diverse (the biracial protagonist has a Black mom and White dad) and tickles funny bones with whimsical details complementing Gimba’s rhyming text.

A child-savvy message about limiting screen time delivered with humor and charm.

Kathy has just come out of teacher training, and is delighted to get her first job at Z Corp’s school, run as part of the program that gives corporations complete control over running some schools. She arrives to find a seemingly model school environment. All right, so the principal is an AI, a few of the lessons seem a little unorthodox, and the library has just been swapped for a data stick downloaded directly into pupils’ brains, but at least they get their homework in on time now. Right? Kathy quickly finds out that all is not what it seems, and has to choose whether to go along with it, or fight against the system.

Not So Heartwarming Stories

Arran Gimba’s collection of short stories takes the reader to new universes & new dimensions as he explores science fiction. The tightly crafted stories collected here are full of deftly drawn characters, universal truths, and often, like good jokes, surprising humor. These stories will shatter readers' perceptions with an unexpected final paragraph. Gimba presents a group of the most surprising and devious twists - from the tragic to the humorous by way of the downright sinister.

The Girl And Her Dad

From the writer of The Girl and Her TV comes The Girl and Her Dad. Her dad ... being the villainous Captain Doom. He's conquered the galaxy, but can he now conquer the heart and mind (and attention) of his daughter? Find out what he does in a whole week to get her to notice him. A story that will captivate your kids while teaching them about the days of the week.

The Girl And Her Rainbows

The girl was a happy girl. Her birthday’s coming up! But what happens when a nasty virus comes to ruin the party? From the author of The Girl and Her TV and The Girl and Her Dad comes the third installment in his series. A book perfect for all ages!
Published: Nov. 1, 2020
ISBN: 979-8565545487

The Girl And Her TV

A little girl loves her TV so much, she forgets what's going on around her. A humorous book with beautiful illustrations that teaches kids all about months while learning why they should look outside every once in a while. The first book in Arran Gimba's The Girl And Her Trilogy.

Tony is a writer of romances and romantic comedy, and his own love life seems to be going okay for once, since he has found himself swept up in a romance with the formidable Ursula (whether he wants to or not, largely, given that Ursula tends to steamroller him into things). They’re even due to get married. It’s then that Lucy, the lead character from his last couple of novels, shows up on his doorstep. She has been encouraged to take a break from fiction by her friend Penny, after complaining to her about all the stupid, annoying things that keep happening in her life. Yes, characters aren’t really supposed to take unauthorized portals out, but she has to know why someone is messing up her life like this for the sake of fiction. And, oh by the way, hunters from fiction show up, determined to capture Lucy. Tony must spend his time trying to ensure that his wedding goes ahead okay and fending off the strange things that have leapt out of fiction, saving his lead character in the process.
Published: Oct. 1, 2018
ISBN: 978-1699512562