Working in Hollywood as a WGA writer, Arthur Jeon sold several scripts, including thrillers to Warner Bros, before becoming an author. Random House published two of his non-fiction books: City Dharma: Keeping Your Cool in the Chaos; and Sex, Love & Dharma: Finding Love Without Losing Your Way. Both books apply mindfulness to the stresses of modern life.

Arthur's love of animals led him to co-creating the non-profit Global Animal Foundation (globalanimal.org). This animal welfare work exposed him to the alarming habitat destruction and extinction rates that generated the idea for Snowflake, his first novel. Arthur Jeon has a BA in Humanities from Harvard Extension and an MFA in screenwriting from USC Film School.

“A topical and angst-ridden, if unsubtle, novel that pulls no punches.”
– Kirkus Reviews 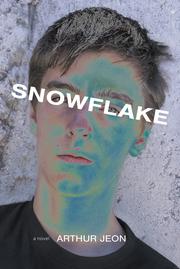 A troubled teenager pursues a radical plan to head off climate change in Jeon’s YA thriller.

Eighteen-year-old Ben Wallace remembers everything he’s ever experienced or read. It may seem like a superpower, but in practice, it’s a curse—one that requires him to see a therapist and to cathartically record his thoughts in a journal to cope. These methods aren’t enough, however, as he becomes increasingly unsettled by stories about world events. Wildfires threaten his Los Angeles home, the world’s future is being destroyed by climate inaction, and Ben’s wealthy neighbors—and the U.S. government—just ignore the problem. His classmates at school seem more concerned with selfies and social media than they are with environmental issues. He soon becomes radicalized, particularly after his asthmatic younger sister, June, ends up in the hospital due to air pollution. It isn’t long before an idea takes root in his head and refuses to go away: In order to save the world, he’ll have to kill the man who’s hurting it the most—the climate change–denying president of the United States. He finds a sympathetic ear in John Hale, a former Navy SEAL who now works as Ben’s STEM teacher. Will the educator be able to stop Ben’s drift into extremism? Ben’s character feels believable, and most readers will find his frustrations over the facts of climate change—which he’s incapable of forgetting or ignoring—to be warranted. The book is formatted as if it’s Ben’s personal journal, and as a result, the narration contains more than a bit of hyperbolic teenage petulance: “Above us, the museum, crapped onto a beheaded mountain by a billion dollars, squats behind a burka of smoke.” He rants against “Fakebook” and “Insta-Lie,” pornography, hunting, and other targets—so much so that when he finally takes action—ill-advised as it may be—the reader won’t be able to help but feel a dark sense of relief. It all builds quite compellingly to a conclusion that seems designed to court controversy. For the most part, though, readers will be left with a sense of hopeless exhaustion.

A topical and angst-ridden, if unsubtle, novel that pulls no punches.

Wilmington, DE (for three months, so, can't claim I know with Joe Biden...)

The Great Gatsby (I know, I know, but what can I say? I just keep rereading it)

I feel sudden sadness about throwing out these journals, stacked like paper coffins, each one holding the body of my life – hours, days, years: destroying them is killing how I became me.

City Dharma: Keeping Your Cool In The Chaos

It's one thing to lead a focused and peaceful life in the quiet seclusion of an ashram or monastery, but what about where most of actually live – in a noisy metropolis or bustling suburb, constantly inundated with the world's latest disturbing news? Hip, helpful, and humorous, City Dharma teaches you how to keep your cool even when the road to enlightenment leads you straight through downtown at rush hour. When we're cut off in traffic, crammed on the subway, or elbowed aside on a crowded street, such thoughtless or aggressive behavior can make our blood pressure rise and our serenity disappear. But it doesn't have to be this way. In City Dharma, Arthur Jeon suggests that it's not what happens to us, but how we react to events and thoughts that cause most of our suffering. City Dharma is the essential guide for everyone living in the sped-up world most of us call home. Offering smart, practical ways to overcome daily stresses and the crazy-making reactivity of our own minds, Jeon explores the most challenging aspects of modern urban and suburban life including: awareness and violence, transcending media negativity, and dealing with road rage within and without.
Published: April 4, 2004
ISBN: 1-4000-4908-3

Sex, Love, and Dharma: Finding Love Without Losing Your Way

Applying the timeless wisdom of the dharma to the joy, challenges, and heartache of contemporary romance, Sex, Love, and Dharma offers a better way to be in love and will help you achieve the true love you've always imagined was possible.