Graduated from Humboldt State University, California with a Masters Degree studying anaerobic bacteria for Lignin Degradation (that's wood pulp after the cellulose is chemically removed).
Used skills learned after flunking out of UCLA as an undergrad to stretch a two year degree program to four years, with plenty of time to be in the local mountains.
Spent some 18 years on the California/Mexico border working as a Public Health Microbiologist/Lab Director in El Centro, playing with all of the deadly, infectious organisms of the time.
Developed software (LIS) for Public Health Laboratories (www.btbsoftware.com)
A writer of an untold number of protocols, procedures, and instructional scientific manuals considered by many to be SciFi.
Owned by numerous Australian shepherds over the years.
Currently semi-retired, supporting software customers, a little photography and writing SciFi books. 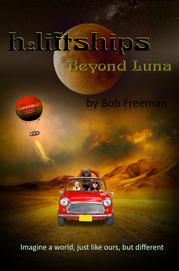 A hard-SF story about a multispecies spaceship.

Freeman’s novel centers on the LunaCola H2Liftship and her diverse crew. H2L crafts are powered by hydrogen balloons, rockets, and enormous solar sails, and when readers meet the LunaCola, she’s on a run to Earth from the moon with a minimal crew. That includes the captain, Grace, who’s old-school: “she was not the ‘ho, ho, ho, and a bottle of rum’ type, but still could squeeze everything out the sails, and sometimes the crew.” There’s the first mate, an octopus who has no name that his crew mates can understand (“ripples of red and ochre moved up and down his body, as if guiding the ship along its path through the cosmos”). And foremost in the narrative are the ship’s other crew members: an orangutan named Tang and a dog named Jack, both genetically engineered for higher cognition and speech. As the narrative unfolds, readers follow Jack and Tang on their Earth adventures; Tang is an enthusiastic gambler and has long dreamed of playing at his personal mecca, Las Vegas. Freeman describes his four crewbeings’ time on Earth and then moves the plot outward, following the H2Liftship on its customary routes from terra firma out to the asteroid belt and back, ferrying goods and raw materials—a familiar SF premise that calls to mind James S.A. Corey’s popular Expanse novels, and one that Freeman exploits with verve and maximum readability. Early on, he tells his readers “the story is a wrapper for the addendum, sometimes it works that way”—but it’s rare that it does so in a novel that’s worth reading. Fortunately, his worldbuilding is energetic and intriguing enough to keep readers turning pages. Along the way, Freeman lays on exposition in layers that are almost, but not quite, heavy enough to crush the dramatic momentum. By contrast, Tang and Jack feel somewhat underdeveloped, but the exotic details of their world overcome that obstacle, as well.

A long-winded but compelling comic adventure.

The only constant is change, and it is a variable

We continue the journey of the LunaCola, a SolarSail powered merchant ship with its small crew as they travel around our heliosphere, trading and dealing with family, friends, and pirates. BioGel computers, often angry and belligerent, are everywhere and in every device. Gambling, food, water, and work keep the sentients active. No blasters, no aliens, no sparking computer terminals, and no FTL drives. The sentients of Earth use the tools and skills learned and polished over eons to colonize our solar system.
Published: Feb. 24, 2021
ISBN: 978-1-64456-276-5