Craig W. Stanfill obtained his PhD in artificial intelligence in 1983, and has spent his career doing ground-breaking research in AI and enterprise computing. He has written numerous scientific papers, co-founded a software company and been awarded more than 80 patents. He continues to work in technology as he sets his hand to writing speculative dystopian fiction. Dr. Stanfill lives an active lifestyle, and is an avid bicyclist, skier, sailor, and musician. With his wife, Sharon (herself a software engineer), he has roamed the world, always seeking out new places and cultures to explore. Together they have one son, who has followed in his parent’s footsteps as a software professional and now works for a high-profile technology company.

“A worthy introduction to a captivating dystopian world”
– Kirkus Reviews 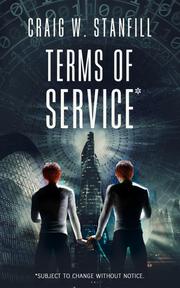 In this SF debut, an employee gradually defies authority in a distant-future city that corporations own and artificial intelligence runs.

Kim purposefully leads a mundane life in an unnamed future city. Corporations like The Transportation Company and The Food Company have their hands in nearly everything, each with its own terms of service. AI systems not only assist in providing services, but also monitor citizens for any violations of the companies’ terms. Kim actually works at The Artificial Intelligence Company but not with any AI; she trains automatons that can’t think for themselves. As such, she pores over surveillance data in search of customers’ potential violations. It’s a tedious job but something she can easily do while she, as a customer herself, abides by all those terms of service. Even her recreation, from a baseball game to a beach party, is done in the manageable environment of virtual reality. But when Kim’s best friend from school, Shan, contacts her, the two go bicycling in the real world. The ride with Shan, who was something of a troublemaker in school, prompts a stockpile of citations from The Parks and Recreation Company and The Transportation Company. But something is off: The AI monitors seemingly let violations accumulate before notifying the cycling friends. Even stranger is Kim, who was convinced she’d lose her job, getting a promotion. Now, she’ll train an AI, conveniently named Kimberly, in “investigative techniques.” But as frequently malfunctioning Kimberly questions The Artificial Intelligence Company as well as the city’s governing Hierarchy, the AI’s possible self-awareness leads Kim to take a closer look at the totalitarian rules.

Stanfill offers a memorable but fairly light dystopia. Some of it is outright depressing; children, by the time they’re 4 years old, must leave the care of their “birth-giver” to live with a harsher “mentor.” But the story isn’t as dark as other SF outings. For example, there’s not much at stake; violating terms of service generates bans from certain activities or places or a hit to one’s social cohesion rating, which just leads to further citations. The author also sprinkles dry humor throughout, like days of the week known as oneday, twoday, etc. Kim is a sympathetic, tragic figure who staves off bouts of loneliness and misses the birth-giver she hardly remembers. Her narrative touches on a few SF staples, including an AI developing human qualities (for example, Kimberly’s envy of humanity’s free will) and VR becoming more real than reality itself. These bolster Kim’s slow but enthralling evolution, sparking a denouement that’s an unmistakable setup for a sequel. At the same time, there are hints of backstory left for a second installment to expand on, like the Turmoil and the AI war, which were apparently catastrophic. Stanfill adorns his prose with vivid descriptions, even when the protagonist dons a VR headset: “Kim dropped into VR at the beach and walked over to a shady spot in a grove of palm trees, where” her friend “Quinn was strumming away on a beat-up old guitar and singing....Kim was still listening when Shan came riding up on a rusty old bicycle, looking sad and forlorn.”

A worthy introduction to a captivating dystopian world.