David Horn lives in New Jersey with his wife, two daughters, and a funny dog named Trixie. He is a huge science fiction fan and loves reading science fiction books from both the old and new greats. His daughters inherited his love of science fiction and they love watching sci-fi shows like Star Trek, Babylon 5, Stargate and Star Wars together. The Eudora Space Kid early reader chapter book series started as funny stories he told his daughters at dinner to get milk to come out of their noses. He hopes all children love Eudora's silly antics in space and milk comes out of their noses too! 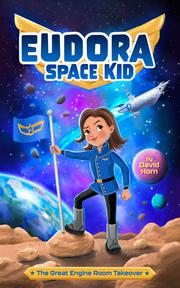 For young Eudora Jenkins, life aboard the spaceship Athenais a daily challenge to make mischief. During a class field trip, she seeks to fire the ship’s plasma cannons, perhaps the most important weapons in the entire space fleet. Her detailed plan includes the use of a hypersonic shocking device she invented, but its execution lands her in the brig and in trouble with her mother. Eudora and her conscientious older sister are human and were adopted at a young age by Wilma, a doglike alien from the planet Pox, and Max, from the planet Pow, who’s close to an octopus in appearance. Eudora’s next endeavor is to engineer the Athenato pass 10 on the HyperDrive-O-Meter, which has never been done before. However, she aspires to be an officer in the AstroFleet one day, and although her love of science and math are well suited for such a career, will her rebellious experiments keep her from her dreams? Horn’s fast-paced, space-themed drama will intrigue and entertain young readers. Eudora’s quirky but focused perspective allows curious kids to ponder the possibilities of life on a spaceship, and her authentic narration is quick and witty. The protagonist’s passion for knowledge is equaled by her energy and ambition, making her a strong role model. Shipman’s illustrations complement the story’s tone and ably portray its uncommon elements. The plot is lighthearted in its approach; however, as a result, Eudora faces few consequences for her pranks, and she seems to achieve her lofty goal a bit too easily. And although the swift pace will keep readers engaged, it leaves little room to explore Eudora’s thoughts about her relationship with her adoptive parents. Overall, this series starter leaves room for further character development and perhaps more serious adventures.

A quick-witted and amusing outer-space escapade.