While we have been pondering the resurrection of dinosaurs in the last few decades, the largest one to have ever existed has been among us ...
A real-life encounter with a raptor-like creature from the age of dinosaurs. An era that never really ended.
I am not the sort of person who goes out of his way looking for encounters with cryptid creatures. I have no interest in believing they are real. I never had any desire to encounter one. Until something appeared right in front of me on an Interstate highway.
After experiencing several plateaus in my life, the truck-driving rhythm of the road has afforded me a lot of time to reflect on my life, my experience, and how to understand reality. My hours of contemplation led me to construct a worldview that emphasized the importance of a “bipedal” existence as a tie-in with all of life--Christian life, in particular. I had a “driver’s seat front-row” experience with the largest bipedal event in all of human history. Applying my endeavors to this new-found-jet-airliner-winged dinosaur has led me to several startling new insights. The purpose of this book is to share these insights with you.
David, or “Bill,” Verhines had experienced academic success, journalistic success, and even Charismatic success. In this single, powerful volume he devises a way to understand everything in terms of a life-satisfying worldview. Now, having drawn the attention of a startling cryptid companion in the process, “Bill” wishes to share his perspective with the church, family, friends, neighbors, and any companion who might listen—be that companion cryptid or otherwise. 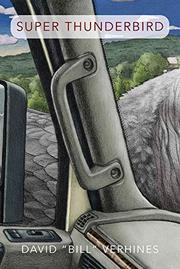 Verhines, a veteran truck driver, relates his encounter with a gigantic, mysterious bird.

In July 2018, the author was driving his rig in Pennsylvania near sunset when he saw the enormous bird. In his initial reaction, recorded for the Pennsylvania Game Commission, he stated that it was a larger-than-average bird. He subsequently revised this estimate upward after both watching an episode of MonsterQuest, a TV show, about giant birds and receiving the exact measurements of “his” thunderbird from God in a prophetic vision. His new estimates are staggering: In this book, he claims the creature he saw in Pennsylvania was 50 feet long with a wingspan of 220 feet (twice as long as an adult blue whale), individual feathers as long as 20 feet, and a possible weight of 2,000 pounds, although he suggests it could be as high as 25,000 pounds (twice as heavy as an adult African elephant). “Its wings and body broke through the sky with such a force that I thought I saw it pushing the air,” he writes. “My guess is that it was dive-bombing me at about 150 miles an hour.” Verhines moves from the account of his own sighting to an overview of other “thunderbird” sightings and to a summary of the whole concept of “cryptozoology,” the practice of theorizing about large, undiscovered animals. But he likewise admits that his primary fact-verification process is religious. “When I want to rivet something down in truth,” he writes, “I use Bible verses or Bible ideas to ground my approach.” He writes about large birds like condors and extinct avian dinosaurs like pterosaurs, but since there is no possibility that an animal the size he describes (much less a breeding population of them) could exist, his digressions on history and speculative biology, however entertainingly written, will likely be dismissed by all but the most zealous cryptozoologists.

A very tall tale about a very big bird.