Gary graduated from the University of Surrey in the UK with a degree in Engineering, embarking on a career that has taken him all over the world from the Far East to the Americas. He is a graduate of the Faber Academy and Curtis Brown creative writing programmes. Now, a father of three, he has settled close to where he grew up on the edge of the South Downs in Sussex, where he indulges his love of books, and passion for writing.

The Given is his debut novel. It is the first in a series of young adult novels to be published in 2021 in which the main character, Jay, has to come to terms with her unusual gift. An exclusive prequel to the series is available for free download on his website - www.garyclarkauthor.co.uk

“...an engaging adventure tale that will leave readers looking forward to the second and final instalment. A solid fantasy for teens with an appealing cast.”
– Kirkus Reviews 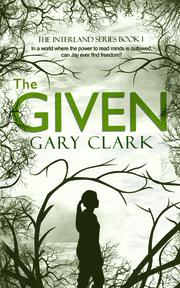 In this YA dystopian series starter, superpowered teenagers dodge government operatives as they try to locate a fabled safe haven.

Eighteen-year-old Jay and her empathetic younger brother, Sammy,have grown up listening to their father tell stories of Interland, a place where people with powers, known as the Given, can be safe from those that hunt them. Jay has known for a long time that that she has a talent for mind reading, but when a special mark appears on her wrist—a rite of passage for those with special abilities—it reveals her remarkably high power level. People who don’t have powers, however, fear the Given for what they can do and what they might become. After herfather is captured by government-employed superpowered types known as Readers, Jay knows that she’ll be next if she doesn’t go on the run. The problem is that Readers have the ability to locate the Given, wherever they go—except Interland. Using an oddly notated map given to her by a local bookshop owner, and clues in their father’s notebook, Jay and Sammy, along with their friends Stitch and Cassie, manage to escape a powerful Reader and go on a quest to find Interland. Clark presents the first of two novels about teens who are simply trying to find a place to be themselves and be safe from harm. Some people may have a hard time acclimating to this fictional world at first, as some of the fantasy elements, including the history of Readers, aren’t explained in great detail, and the narrative point of view switches frequently among the various characters. Still, the story is fairly streamlined, and it will reward those who persevere. The main players—specifically Jay, Sammy, and Stitch—feel genuine and are easy to root for. Some others, though, feel more like plot conveniences, such as Jay and Sammy’s mother and the aforementioned bookshop owner. Overall, this is an engaging adventure tale that will leave readers looking forward to the second and final installment.

A solid fantasy for teens with an appealing cast.

Darkness threatens - this time Jay must fight for the very survival of the Given. INTERLAND is a thrilling dystopian adventure that takes us deeper into a world where the chosen few have the power to read and manipulate minds - an exciting sequel to The Given.By releasing the power of her connection with the energy of the land, the sea, and all living things, Jay defeats the Readers and discovers the sanctuary of the Interland. Safe from the oppression of the State, Jay is free to explore and develop her powers. But the world outside deteriorates, and once again the darkness of the Readers closes in, and Cassie is taken. Jay must dig deep to resolve her inner conflict between a desperate desire to remain protected in the Interland, and the need to leave her sanctuary and embark on a quest to save her friend. All is not what it seems, and Jay’s fight to save Cassie becomes a battle for the very survival of the Given.
Published: April 12, 2021
ISBN: 9781838401016