Kenneth Allen Crutchfield, Sr. was born on the south side of Chicago into a family of musicians. During his formative years he worked as a professional drummer in Chicago then traveled globally after finishing high school. He received a Bachelors degree from the University of Southern California and a Masters degree from Queens College (CUNY) in New York City, both in music. He has written several plays, The Great Kickin' Dog, Balloon on a String and Lorna's L'Elegant Lounge; two musicals, All God's Saints Go To Heaven-Not and Bones Brothers Brothel. All were produced in New York City as well as nationally. Ken is also a writer of prose and pens poetry as well. The 'Great' Kickin' Dog' is his first novel, loosely based on his family. It was written at the urgency of his wife, Terry, who thought it to be an important story to tell. He started writing it as a tribute to his compassionate and resilient father who died two weeks after the book’s completion. Then upon the sudden deaths of his mother and brother soon after, he was quite thankful to have written this fictional story as a memorial to their fascinating lives. And during the writing process, Ken was extremely grateful to be able to fulfill the need to create while at the same time provide a channel for his pent-up emotions. 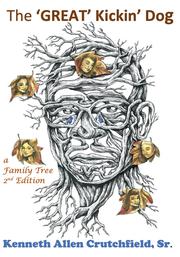 Chicagoan John Coleman Sr. works a grueling assembly line to keep his family off food stamps. His passion is music, and he and his 7-year-old son, John Jr., are jazz drummers with regular gigs. John learns, quite unexpectedly, that his youngest, Troy, who can reach the drums only by standing, is a natural with the sticks. John Sr. quits playing to teach his gifted sons to “get great” and reach stardom. It’s a lot of pressure for him and the boys, though, and John uses alcohol to cope. Meanwhile, Mary, the matriarch of the family, is raising their six children. She adds to her heavy workload by taking a job at a local motel. With a family history of mental illness, Mary fights to keep her anger and frustration from affecting the children. Money is tight, but if the couple saves enough, they can possibly escape the projects. Segregation, however, paints an “ethnic dividing line” in Chicago, which diminishes their options significantly. Crutchfield’s story moves at a measured tempo. The author animates 1960s Chicago as, for example, John drunkenly stumbles through snowy streets and into a late-night rib joint where the customers are typically armed. The story abounds with well-imagined turns; the Colemans contend with racism (e.g. at school) and a turbulent home life. Not all is bleak; Troy colorfully compares his family’s lives with TV and the movies, sensing danger like the robot from Lost in Space or using his “Spidey sense.” An effective, unpredictable finale completes the novel.

A deliberately paced, absorbing story of a household’s internal and external hardships.