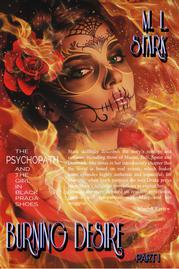 A vulnerable woman falls into the predatory clutches of a smooth-talking physician in this novel.

When Mary fatefully meets Dr. Drake Lucifer Bates, she muses: “The name ‘Drake’ makes me think of a dragon. Oh no! ‘Lucifer’ I know from my faith, and it reminds me of the fallen angel sent to hell by God. The devil? Holy cow! Goosebumps run chillingly along my spine, but I don’t know if they are good ones or bad ones.” At the time, she is a “fragile personality”—her marriage of more than 20 years to her husband, Paul, seems destined for divorce, the result of his deceitful infidelity. She is also suffering from terrible chronic pain in the aftermath of back surgery. When Mary encounters Drake at his clinic in Spain, her original impressions are contradictory—on the one hand, he is monstrously inappropriate, unabashedly flirtatious and visibly aroused by her. But she is drawn to his “spicy body,” his empathy, and charisma. She wonders if he can save her from a life of emotional disappointments: “For me, he’s the genuine dream of a man, a spellbinding phantom of my shining white saviour on a white rescue horse.” But she begins to detect the “deep darkness of his evil agenda” and his rampant dishonesty and even starts to suspect he is a sociopath. Drake turns out to be a malicious “puppet master” and not only uses Mary for sexual exploitation, but also convinces her to leave her husband, all the while bilking tens of thousands of dollars from her.

Stark’s entire novel is written in the style of a memoir, with Mary serving as both protagonist and narrator, conveying her lament with breathless melodrama assisted by an infinite arsenal of exclamation points. The author is at her best exploring the way an intelligent, even skeptical woman could be so thoroughly deceived by such a clumsy, transparent huckster. But the plot is meanderingly ill disciplined and often reads like an interminable, furious jeremiad. Mary complains for pages and pages in the most hyperventilated register about her woes, and that is essentially the crux of the tale. There is no element of suspense—Mary announces from the beginning that Drake is a con man and she is his dupe. Still, the weakest feature of Stark’s book, the first installment of a trilogy, is the writing, which seems pitched at one tone—screaming. Here, Mary is about to succumb to Drake’s incessant advances: “Shame on me! I’m a dead drunken fish on his hook! In my half-drunk condition, I’ve left my brain in the last glass of whisky. Oops! I know I must say no, but I’m only human and have desires! So, I’m about to fall right into his cunning, sexy plan to seduce me, as his gentle caresses [sic] and while he speaks sensitive words in my ears.” As a result, this is an exhausting story—the author’s prose exacts a heavy toll on readers who make it to the end of the work.

An intriguing but rambling tale about a woman and a psychopath.