Susan Knox Kopta, a legal research and writing attorney for twenty years, authored Ballasted Wings: Why That Day? and created a bipolar resource hub on BipolarLinks.com. She is a strong supporter of Fountain House's College Reentry program which provides tools, skills and guidance for students preparing to return to college following mental health leave. Her goal is to raise awareness of the need for immediate transitional care upon discharge from inpatient psychiatric care. 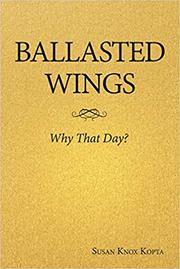 A mother relives her daughter’s struggles with bipolar disorder in this debut memoir.

“Alexis’s wings lack ballast. She soars too fast. She flies too high,” writes Kopta as she prepares to examine her daughter’s early achievements. Before being diagnosed with bipolar disorder, Alexis was accepted for early admission to Barnard, the prestigious women’s college in New York City. She loved university life; off campus, she interned for Hillary Clinton. The author describes her daughter’s numerous successes as being on the “wings of mania.” Yet this “euphoric creativity” brought with it an “avalanche of ideas” that overwhelmed her, leading to “manic and depressive cycles.” Alexis subsequently turned to drugs and was taken to the emergency room after being forcibly injected with heroin. From there, she admitted herself to a psychiatric unit, where, at the age of 22, she was diagnosed with “rapid cycling bipolar I.” The book recalls her sad journey, in which she considered suicide, suffered traumatic side effects of medication, and mourned her unfulfilled dreams. The memoir is unusual in that it is written in the present tense, which readers will find difficult to attune to in the first few pages. But soon this unconventional approach proves to be effective, creating a sense of immediacy, as illustrated by the moment when Alexis is injected by an individual referred to as “The One-in-Need”: “A body atop. Alexis struggles. Her arm imprisoned, reddens and swells. The One-in-Need muscle pops Alexis with heroin.” The technique causes readers to feel directly involved in Alexis’ life while simultaneously creating a sense that the narrator is observing her daughter’s struggle but is rendered helpless in saving her. On occasion, Kopta employs mixed metaphors, such as “wings of mania,” followed closely by “riding mania’s wave,” but this can be excused given the work’s poetic sincerity: “Her beautiful essence remains, clouded yet present. The person I love is always there. Never so far up nor so far fallen that my heart cannot sense hers.” Illustrated with uncredited black-and-white photographs of Alexis throughout and offering resources for others facing similar challenges, this personal account succeeds in vividly describing the gamut of emotions experienced by those diagnosed as bipolar and their families.

A creative, immersive, and affecting portrait of bipolar disorder.

Ballasted Wings: Why That Day?