Yaroslav is a Nebula Award finalist and a member of Science Fiction and Fantasy Writers of America. After leaving his ball and chain at the workplace, he goes on to write stories that deal with things he himself, thankfully, doesn’t have to deal with. At some point in his life, he’s left one former empire only to settle in another; now he speaks Russian in the morning, German by day, and English by night. 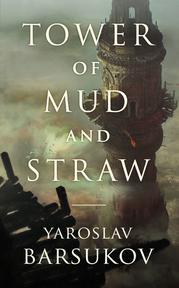 TOWER OF MUD AND STRAW

A man reckons with his past while overseeing the construction of a tower in this debut SF novel.

Shea Ashcroft disobeyed Queen Daelyn. He refused to gas protesters who ran amok in Red Hill. As punishment, she banished Shea to the border shared with the rival nation of Duma. Now, the former minister of internal affairs and ex-counselor to the queen must see to the completion of the Owenbeg Tower, an “anti-airship stronghold.” But Shea receives a chilly welcome from the duke at Owenbeg castle. The paranoid duke intends to censor Shea’s reports to the queen regarding details of the tower’s construction. Shea soon learns that instances of sabotage at the tower involve dangerous Drakiri technology. The humanoid Drakiri have been allowed to settle in Owenbeg, and their egg-shaped “tulips” provide anti-gravity assistance for raising the nearly 1,000-foot structure. But if not properly handled, the tulips implode, sucking in whatever surrounds them. Shea thinks often of his sister, Lena, whose death resulted from mishandled tulips. Doubly strange is that the duke’s counselor of arts is a striking Drakiri woman named Lena. She shares with Shea her people’s record of the Mimic Tower, which sprang into being as they tried to build another tower. Ultimately, the Mimic Tower destroyed many of the Drakiri, which is why none of Lena’s tribe labor on the Owenbeg Tower. As Shea falls for Lena, he becomes determined to ban tulips from the construction process. Yet Chief Engineer Brielle has a secret that makes such a move impossible.

Barsukov’s slim novel will remind readers of Robert Silverberg’s Tower of Glass (1970) and China Mieville’s work, which frequently includes a Cold War flavor of decrepit bureaucracies. While the Owenbeg castle appears lavish, “moths had taken a good bite out of the couches’ velvet.” The Owenbeg Tower, even unfinished, feels mythic, as in the passage “Entering it was entering a city...a world painted by a lover of chiaroscuro...shadows lay in pools of ink, and there were blinding patches of daylight.” The Drakiri seem slightly vampirelike, with their enhanced speed, strength, and elegance—though no blood drinking is ever mentioned. Barsukov sketches in characters slyly, as Shea assumes Lena is the duke’s lover, half revealing to readers his own desire. Echoes of Shea’s sister haunt him in the way this new woman “holds her head, the pride. The eyes.” When he survives an assassination attempt, Shea intuits that Patrick, the duke’s military counselor, is the culprit because of how the duke embarrasses the man publicly. The tower as an arms race metaphor succeeds gracefully. Drakiri technology is useful, as is nuclear power, but the drive to overshadow one’s enemies can lead to self-destruction. The author depicts the fantastic sparingly so that the instances pop against the narrative’s overall gloom. One character’s augmented hand, for example, “branched off in metal and purple veins,” and its “knotted ‘fingers’ rolled in the air as though strumming a chord.” One scene that reveals some truth about the Drakiri, their origin, and the reality of the Mimic Tower is pure surrealism.