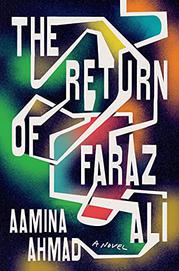 THE RETURN OF FARAZ ALI

A young Pakistani police officer’s investigation leads him deep into his own past.

The story begins with a crime: Sonia, an 11-year-old sex worker in Lahore’s red-light district, has been killed. Though Faraz Ali has been dispatched by his father, a local politician, to cover up the murder, he can’t bring himself to follow orders. In late-1960s Pakistan, against the backdrop of Zulfiqar Ali Bhutto’s rise to power, Faraz’s unwillingness to play politics, to simply do as he’s told and reap the rewards, has grave consequences. He's reassigned to East Pakistan, where he's seen as an occupier by those fighting for a free Bangladesh, yet another test of his moral fiber. Throughout, his relationship to his powerful father remains a secret, as does the fact that his own mother is a sex worker and he was born in the red-light district himself. While Sonia’s case recedes during the upheavals of war, the injustice won’t leave Faraz, propelling him to reconcile who he is and where he comes from to solve the mystery of her death. The book also follows Faraz’s older sister, Rozina, a sex worker aging out of favor who must secure a future for herself and her adolescent daughter, a dreamer intent on leaving her origins behind, as well as Faraz’s father and his experience as a POW in a pre-Partition era. With each character’s journey, author Ahmad explores the multifaceted nature of longing and loss and what the loneliness they engender is all for. This novel has everything a reader could ask for: a sizzling, noirlike plot; political intrigue juxtaposed with a rich intergenerational family saga; capacious, conflicted characters, including women who may be marginalized by society but are masters of their own narratives; and sublime sentences. A debut novelist, Ahmad manages this complexity seamlessly.

A feat of storytelling not to be missed.