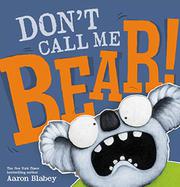 An anguished koala beseeches readers not to confuse koalas with bears.

Warren, a frustrated marsupial, introduces himself and carefully explains the confusion. Yes, he’s furry, and yes, the explorer Capt. Cook misidentified his species years ago, but Cook was wrong. Bears live in the U.S., Canada, and the polar regions. “Australia doesn’t have bears!” Australia has marsupials such as kangaroos and wombats, emus (which are not chickens), and platypuses (which are not ducks). Blabey’s smoothly rhyming text is set in varying typefaces and fonts to emphasize Warren’s vexation. Australian terms, such as “chook” for chicken (defined in context) and “bush,” meaning a sparsely inhabited region, have been retained in this U.S. edition of a title first published in Australia in 2016. Humorous acrylic paintings feature the koala wearing various types of garb. In a chart of five marsupial species, all wear only tighty whities, guaranteeing giggles. Speech bubbles set on commanding background colors (lime green, deep yellow, ginger orange, light olive, and a deep red) carry the text and will show well to a group of kids who may want to chime in. Observant viewers will notice the crossed-out word in the phrase “koala bear” on a book cover and a toy store sign. When the kangaroo, emu, and platypus point out the obvious—he looks like a bear—he leaves in disgust. Pair with Jackie French and Bruce Whatley’s Diary of a Wombat (2003) for an Australian storytime.