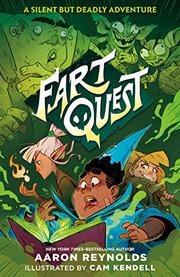 From the Fart Quest series, volume 1

Three children set out on a quest to prove they can be heroes.

Bartok, a 12-year-old Black boy, was nicknamed Fart by the master he apprentices under after choosing Gas Attack as his first spell to learn. He wants to be an exalted mage instead of an average human. Fart and his group—Pan Silversnow, Moxie Battleborne, and their respective masters—are only three months into a yearlong journey. They must prove they can survive the wilderness of the Fourteen Realms while helping others and defeating evildoers in order to graduate from Krakentop Academy for Heroes. When the masters are obliterated before their very eyes, Moxie and Pan are ready to head back to the academy, but Fart insists that they should use the opportunity to demonstrate their bravery. After taking their masters’ belongings, the trio defeat a hobgoblin then set off in search of heroic escapades. Chaos ensues as the group comes up against giant bees, ogres, and other mythical creatures. Though the story is told from Fart’s perspective, Moxie and Pan are just as important as the three learn to work as a team and recognize each other’s strengths. The humorous writing, wacky names, lively, cartoonlike illustrations, and simple text will especially appeal to reluctant readers. Pan is an elf who is cued as Asian; Moxie is a dwarf who appears White.