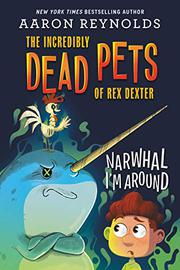 From the Incredibly Dead Pets of Rex Dexter series, volume 2

In this sequel to The Incredibly Dead Pets of Rex Dexter (2020), sixth grader Rex is determined to once again use his ability to communicate with dead animals for the greater good. A ghost narwhal’s visit gives Rex his next opportunity in the form of the clue “bad water.” Rex enlists Darvish—his Pakistani American human best friend—and Drumstick—his “faithful (dead) chicken”—to help crack the case. But the mystery is only one of Rex’s many roadblocks. For starters, Sami Mulpepper hugged him at a dance, and now she’s his “accidental girlfriend.” Even worse, Darvish develops one of what Rex calls “Game Preoccupation Disorders” over role-playing game Monsters & Mayhem that may well threaten the pair’s friendship. Will Rex become “a Sherlock without a Watson,” or can the two make amends in time to solve the mystery? This second outing effectively carries the “ghost-mist” torch from its predecessor without feeling too much like a formulaic carbon copy. Spouting terms like plausible deniability and in flagrante delicto, Rex makes for a hilariously bombastic (if unlikable) first-person narrator. The over-the-top style is contagious, and black-and-white illustrations throughout add cartoony punchlines to various scenes. Unfortunately, scenes in which humor comes at the expense of those with less status are downright cringeworthy, as when Rex, who reads as White, riffs on the impossibility of his ever pronouncing Darvish’s surname or he plays dumb by staring into space and drooling.

Funny delivery, but some jokes really miss the mark.