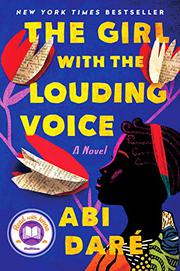 THE GIRL WITH THE LOUDING VOICE

A Nigerian teenager determined to get an education escapes an arranged marriage in her village but finds that life in the city is dangerous, too.

Adunni, the 14-year-old protagonist of Daré’s moving first novel, longs to be educated and dreams of one day becoming a teacher. “I even been teaching the small boys and girls in the village ABC and 123 on market days,” she says. “I like the way their eyes be always so bright, their voices so sharp.” But in her village, girls are supposed to marry early, have babies, and take care of the men. With her supportive mother dead and a father who doesn’t believe daughters need schooling, she is forced into a brutal, unhappy marriage with a much older man who already has two wives. One wife befriends her and tries to ease Adunni’s loneliness and suffering. But when tragedy ensues, Adunni flees to the crowded city of Lagos in hopes of finding a better future. Instead, she ends up as an indentured servant in an abusive household, where her hopes for learning are further stifled. Daré, who grew up in Lagos and now lives in the U.K., paints a bleak and vivid portrait of the expectations and sexual dangers for rural Nigerian girls, who are exploited as workers and punished for having “a louding voice” (meaning they dare to want a say in their own future). Adunni’s dialect will be unfamiliar to some readers, but the rhythm of her language grows easier to follow the more you read, and her courage and determination to make her own way in life despite terrible setbacks are heartbreaking and inspiring. Daré provides a valuable reminder of all the young women around the world who are struggling to be heard and how important it is that we listen to them.

A moving story of what it means to fight for the right to live the life you choose.