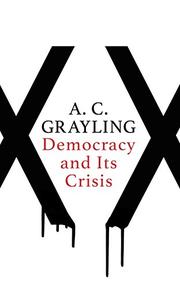 DEMOCRACY AND ITS CRISIS

Of democracy and its discontents, with a resonant defense of what Winston Churchill called “the least bad of all systems.”

Two recent developments, writes Grayling (Philosophy/New Coll. of the Humanities, London; War: An Enquiry, 2017, etc.), indicate that “something has gone seriously wrong in the state of democracy”: Britain’s Brexit referendum, in which, by the author’s account, a minority partisan group superseded the interests of the entire polity, and the election of Donald Trump, the product of an outmoded Electoral College system that had the same effect. As the author notes, democracy is not just the notion that the people are the source of consent to govern and the ultimate sovereigns, but the arrangement of constitutional accords and institutions so that everyone’s interest is represented, along with guarantees of civil liberties and a strong commitment to the rule of law and the idea that the law applies equally to everyone. “Each vote should have equal weight,” Grayling ventures, noting that in both the U.S. and Britain, as well as elsewhere, this foundational principle is under attack. Surveying ancient ideas of democracy and their reformulation in the contending philosophies of John Locke and Thomas Hobbes, among others, Grayling examines the benefits and contradictions of popular sovereignty—which, he notes, really means in the U.K. that the Parliament is sovereign, since “there is no power in the land—not the Crown, not the courts—which can overrule it, other than itself.” In this respect, the American system of checks and balances is more than a nicety. Grayling concludes his argument, lucid if at times a touch technical, with specific recommendations for reform, including “complete transparency about the funding involved in an election campaign” and universal suffrage at the age of 16—as well as mandatory voting.

A compelling book worthy of being shelved alongside the Federalist Papers and Two Treatises of Government.