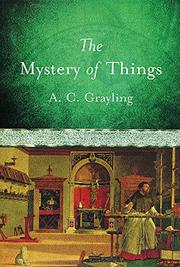 THE MYSTERY OF THINGS

A smattering of brief, mildly engaging essays for the lay reader on art, literature and culture.

Largely written for his weekly column in the London Times, these levelly composed, rather sketchy and miscellaneous pieces range over topics Grayling (Philosophy/Birbeck Coll., London) has glanced upon during academic research and many trips to the British Museum: Hitler as an art collector, the distressing trend away from classical studies, the relation between liberal-left sentiments and high culture, the understated achievements of Mesopotamia and the useful service genetics performs in destroying myths about race, among others. Many of the selections are subtly framed around a book review. In “Shakespeare’s Genius” (one of the few essays with some meat), Grayling expands on Harold Bloom’s point in Shakespeare: The Invention of the Human that the Bard was “one of the founders of modern consciousness because he puts individuals (not types or tokens, as his fellow dramatists did) before us.” He ponders “the strange admixture of tenderness and sharpness” in “William Burroughs’ Last Journals,” wondering whether the Beat writer would have achieved higher status in the literary pantheon had he not been so wrecked by drugs. “Five Women Speaking French” looks anew at the achievements of Simone de Beauvoir, Louise d’Épinay, Madame du Deffand, Charlotte and Emily Brontë (in Belgium). The last two sections treat currents in history and science. In “The Bible as History,” Grayling discusses Thomas Thompson’s controversial thesis that “the Old Testament is not a record of Israel’s origins . . . but a later attempt to provide Israel with a heritage.” That sense of heritage helped Jews endure centuries of oppression that culminated with the horrors examined in “Anti-Semitism and the Holocaust.” Grayling ventures wherever his intellectual curiosity (or the academic wind) takes him and even deigns to join the controversy on alien abductions, sagely reminding us that “the spirit of rational inquiry is not reserved to science.”