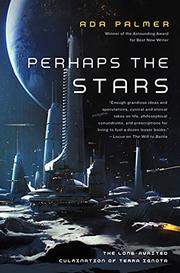 From the Terra Ignota series, volume 4

The fourth and final volume in the Terra Ignota series, a science fantasy set on a 25th-century Earth where people affiliate by philosophy and interest instead of geography.

For the first time in centuries, the world is seized by war—once the combatants actually figure out how to fight one. While rivalries among the Hives provide several motives for conflict, primary among them is whether J.E.D.D. Mason, the heir to various political powers and apparently a god from another universe in human form, should assume absolute rule over the world and transform it for the better. Gathering any large group to further the progress of the war or the possibility for peace is hampered by the loss of the world transit system of flying cars and the global communications network, both shut down by parties unknown, indicating a hidden and dangerous faction manipulating the situation for its own ends. As events play out, they bear a strong resemblance to aspects of the Iliad and the Odyssey, suggesting the persistent influence of Bridger, a deceased child who was also probably a god. Is tragedy inevitable, or can the characters defy their apparent fates? This often intriguing but decidedly peculiar chimera of a story seems to have been a philosophical experiment, but it’s difficult to determine just what was being tested. The worldbuilding—part science, part magic—doesn’t really hold up under scrutiny, and the political structure defies comprehension. The global government consists of an oligarchy of people deeply and intimately connected by love and hate on a scale which surpasses the royal dynasties of old, and it includes convicted felons among their number. Perhaps the characters are intended as an outsized satiric comment on the way politicians embrace expediency over morality or personal feelings, but these supposedly morally advanced potentates commit so many perverse atrocities against one another it is difficult to engage with them as people. At times, they seem nearly as alien as J.E.D.D. Mason.

Curiously compelling but not entirely satisfying.