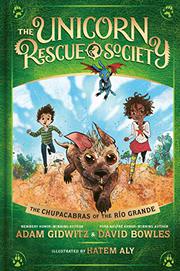 THE CHUPACABRAS OF THE RÍO GRANDE

Uchenna and Elliot join Professor Fauna on a trip to the southern border to rescue the mythical chupacabras.

In this borderland adventure of the Unicorn Rescue Society, Peruvian Professor Fauna whisks Uchenna and the ever reluctant Elliot out of class and flies them down on a dilapidated plane to Laredo, Texas. The trio’s mission is to rescue a baby chupacabra, whose pack’s feeding pattern has been disrupted by a border wall. In this fourth installment of the series, Gidwitz seeks to provide credibility and authority on border topics by bringing on Mexican-American author Bowles as a co-writer. However, their effort to incorporate complex topics—such as environmental and immigration issues—into an otherwise formulaic and predictable plot falls short, as the complexities of border life are constantly pointed out and explained by adults. As in previous installments, one of Professor Fauna’s ex-colleagues makes an appearance to aid the group in thwarting whatever species-endangering scheme the Schmoke brothers may have concocted. The encounter between Dr. Cervantes, a Mexican-American professor teaching at Texas A&M, and her former mentor creates tension between the adult characters, forcing the children to become spectators who simply learn and imitate the correct behaviors from adults. Uchenna presents black and Elliot, white.

An unsubtle and unengaging attempt to educate children on border issues.