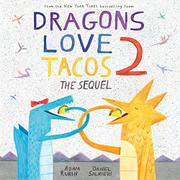 As if the fiery disaster of the first outing (2012) weren’t bad enough, news that the world’s entire supply of tacos has been used up leaves not just the dragons dismayed.

Fortunately, there’s a time machine in the garage, so it might be possible to bring new seed stock for taco trees (didn’t you know?) from the past. Unfortunately, said device is hard to calibrate— first they undershoot back to the previous volume’s spicy-salsa–fueled holocaust and then overshoot to a similar catastrophe in prehistoric times. Subsequent ventures into alternate space-time continua lead to universes where dragons love…diapers (“That’s not right”), and tacos chow down on dragons (“Weird, but closer!”). Then, when the chunky white lad leading the draconic expedition does finally get it right, only the taco in his lap survives the trip back to the present. That’s enough for a happy ending, though, as Salmieri shows in the last of his naïve-style cartoon scenes with a taco party in which dragons and diversely hued figures (some recognizable) from various historical and fantasy realms mingle. “After all,” as Rubin puts it, “dragons love diapers. I mean, tacos. Dragons love tacos. / Heck, everyone loves tacos.”

Most young readers, even those in diapers, would agree.