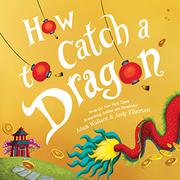 HOW TO CATCH A DRAGON

From the How To Catch… series

A kid tries to catch a good-luck dragon hiding around town as the family prepares for Chinese New Year following the formula established in How To Catch an Elf (2016) and other series installments.

After hearing Mom wish for a dragon to bring health and fortune for the new year, a boy (presumably Chinese) and several friends (of varying racial presentations) discover a dragon lurking about town. Among the Chinese-style architecture of the town buildings, they employ various fantastical lures related to Chinese culture to catch it, including a web of noodles and sticky rice, a giant red lantern, gold coins, and a dragon dance. The simple and often awkward rhyming quatrains leave no room for deeper insights into Chinese culture, but each stanza does include one or two highlighted words whose Chinese translation can then be found within the illustration. The entire text is translated into Simplified Chinese with Pinyin in the backmatter for cross-referencing. Elkerton’s digitally painted, colorful cartoon illustrations depict a diverse cast of modern-looking children against a backdrop of a traditional Chinese village. Ultimately, despite the protagonist’s failure to catch the dragon, it is being within the embrace of a loving family (depicted as a mother and a grandmother) that is the luckiest of all.

A joyful if simplistic celebration of Chinese New Year culture.