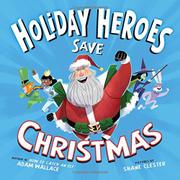 THE HOLIDAY HEROES SAVE CHRISTMAS

The Tooth Fairy, the Easter Bunny, a witch, and a leprechaun help out when Santa comes down with a cold.

At a meeting of the Holiday Heroes, Santa tells the others that he won’t be able to deliver presents this year. They overcome their shock when he offers to train them at the North Pole. The adventure unfolds at breakneck speed as the heroes do their best to get to a “bazillion” houses by morning. Along the way they encounter problems trying to land the Super Sleighmobile 3000 and crashing into a Christmas tree as they come down a chimney. Santa keeps an eye on them by video and helps things along. When they’re spotted by a child, they use their unique superpowers to put things right with “sleeping fairy dust,” superstrength, superspeed, and magic. With its narrative boxes and speech bubbles, the bright illustrations are a cross between comic-book and TV-cartoon styles. Each hero is described on a separate page with a profile that includes their catchphrases, likes, and dislikes. Only Santa and the Tooth Fairy are introduced at the beginning of the book. The others, somewhat puzzlingly, are at the end. Santa and the leprechaun are depicted as white, the Tooth Fairy is black, and the witch, of course, is green.