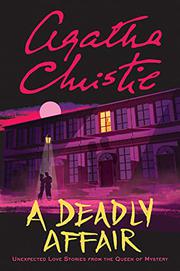 Unexpected Love Stories From the Queen of Mystery

Fifteen reprinted stories, most of them originally published between 1923 and 1933, for those who think the doyenne of golden-age detective fiction had no time for love.

Fans of Christie’s novel-length puzzlers won’t be surprised to learn that love doesn’t conquer all. In “Death by Drowning,” Miss Jane Marple announces Rose Emmott, unmarried and pregnant, has been murdered, and she knows by whom. A pair of lovers confess separately to killing the woman’s husband in the Harley Quin mystery “The Love Detectives.” Hercule Poirot intervenes in a lovers’ triangle only just in time to prevent murder in “Wasps’ Nest,” as does Quin’s friend Mr. Satterthwaite in “The Face of Helen.” Soon after asking the vacationing Mr. Parker Pyne to determine whether she’s being poisoned in “Death on the Nile,” the importunate Lady Grayle is dead. Tommy and Tuppence do their best to compete with the Father Brown franchise in “The Man in the Mist.” It would be a stretch to call most of these love stories, and amateur sleuths would have to look even more closely to find the romance in “Fruitful Sunday,” in which a jeweled necklace appears in a just-purchased bowl of fruit, or “The Case of the Caretaker,” in which Miss Marple’s physician gives her a mysterious story to read and solve. But love plays a more central role in the lesser tales “The Case of the Rich Woman” (a client of Mr. Parker Pyne’s who is seeking happiness finds it through an unexpected romance) and “Magnolia Blossom” (a straying wife is torn between loyalty to her husband and the creditor she loves), and in the best of the bunch, “The King of Clubs,” Poirot deftly uncovers the truth about a lothario who deserved exactly what happened to him. The collection is capped by Christie’s reminiscences of two abortive romances of her own.

A decidedly mixed bag, not unlike love itself.